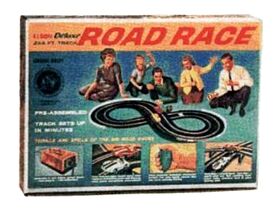 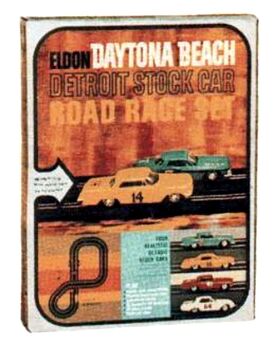 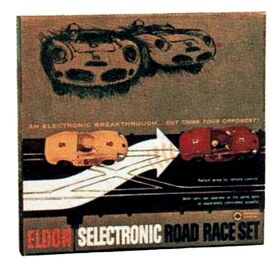 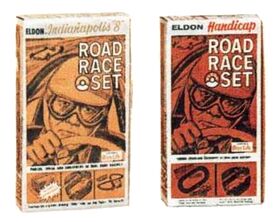 How you can own a layout like this
(and get it faster three ways with Eldon!)

First, start with any Eldon Road Race Set. They're all engineered for hour after hour of trouble-free fun. Yet they cost less than any comparable sets in the road race field.

Next, add to your basic layout with extra track and other Eldon action-accessories. Your money buys more because Eldon accessories also cost less.

Remember more boys own Eldon Road Race Sets than any other sets in the world. And for three good reasons.

Now, are you on the right track?

YOU CAN BUILD THIS GREAT LAYOUT
THE LOW COST ELDON WAY!

Rubber smokes and squeals as you send your speeding Ferrari racer hurtling from one lane to the other. You've cut him off! Now ... steady ... check the lap counter as you slide around that curve. Just one lap to go! Stay ahead and the race is yours! The crowd roars as you flash out of the last turn and scream down the straightaway to victory!

START WITH ANY ELDON ROAD RACE SET ... You'll have more to start with. Eldon Road Race Sets cost less than any comparable sets in the road race field. Eldon's Selectronic Set allows you to switch lanes by remote control while operating both cars on the same lane ... at separately controlled speeds. Eldon's new Daytona Beach Set has fast Detroit stock cars with extra interchangeable bodies. The Indianapolis "8" Road Race Set, the Deluxe Road Race or even the lowest priced Handicap Road Race Set let you start the basic layout. Then – add all the exciting Eldon action-accessories you want. Your money will buy more because Eldon accessories cost less.

When you race with ELDON, you're ahead all the way!

ELDON CUP ROAD RACE SET
New! Excitement galore! Sportscar racing in miniature! 2 rheostat controlled, Ferrari-type sportscars race around a big 2½ foot by 5 foot figure 8 track with overpass. Both cars travel exactly the same distance! It's a sport of skills! Develops the timing and co-ordination necessary to win races without skidding off the track on the turns and to gain speed on the straightaway. Set includes: 2 authentically detailed Ferrari-type sportscars with 12V carbon brush motors and worm gear drives: cars run on any 12 volt DC power pack from ½ amp. up. The handsome gold trophy ... a lap counter. 28 pieces of track, pre-wired with long lasting U-groove metal conductor. 2 rheostat switches to control the speed of each car, billboard and car decals.