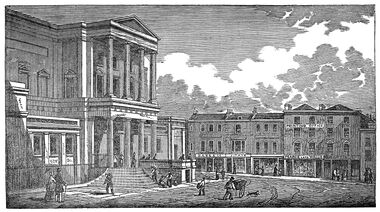 1860: engraving of the Town Hall and some nearby businesses [image info] 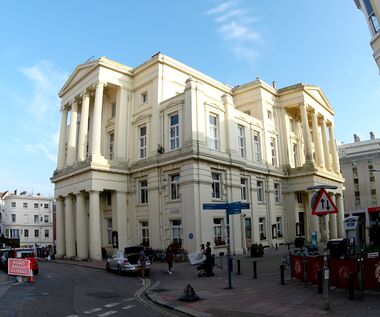 Erected at an expense of £30,000, is an immense pile of building, with three double porticoes. Its dimensions are 144 feet by 113. It contains, in the basement story, rooms for confinement; and, above these, offices for the magistrates, &c., with a large room used as a market. Ascending the staircase, we come to a spacious apartment for the petty sessions, with others for private business, and a room for the commissioners of the town. The upper story contains a handsome Assembly Room.

, situated between Market and East Streets, a little way back from the King's Road, was originally erected in 1828-30. It was a heavy-looking, old-fashioned structure, quite unworthy of the most famous of English watering-places. In 1897 the building was entirely gutted and re-arranged, and a wing added on the east side, though externally the main architectural features were preserved. The building, however, is all too small for its purpose and will in the near future probably be enlarged.

Opposite the Town Hall is one of the two

In the principal part of the building to which we have come, vegetables and fruit are sold wholesale, on Tuesdays, Thursdays, and Saturdays, and the neighbouring streets are filled with carts laden with garden produce to be disposed of in the same way. Adjoining the wholesale market is the Floral Hall and Arcade, which vies in its gorgeous colour effects with Covent Garden.

The other Corporation Market is on the neighbouring beach, and is for the sale of fish, which are disposed of by "Dutch auction."