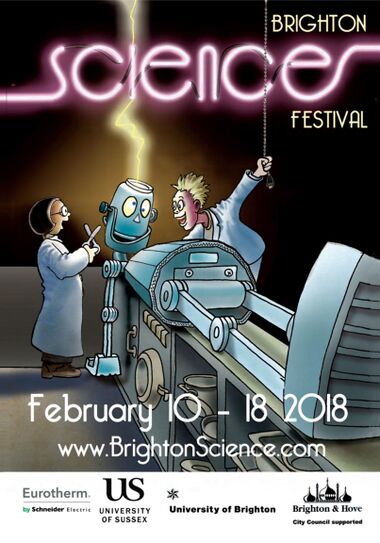 The Brighton Science Festival is one of the truly great things about Brighton. Traditionally held in February, the Festival celebrates fun activities that teach, reveal (or are just dimly related to) science and/or engineering.

The festival is supposedly mostly for kids, but ... it's common to see adults with a dangerous gleam in their eyes pushing their way to the front and having a damned good time.

Events are unashamedly focused on letting people forget about being grown ups. The science of chocolate, making bridges out of drinking straws, magic tricks, it's all good.

It's a matter of some embarrassment to us that we didn't get to participate in the Fair until 2018, after it had already been going for over ten years. This was because of a long-standing calendar conflict with Brighton Modelworld, which used to be held every year in the second half of February, and which would blot out this part of our calendar. The final ModelWorld was in 2016, and we spent February 2017 adjusting to the loss ... but then when we understood that MW really wasn't going to resurrect itself immediately, we realised – hey, this means we can finally be part of the Science Festival!

For the 2018 BSF we had two events: a Balloon Car making-and-racing day (for which we opened specially on a Monday), and a day making Victorian optical toys.