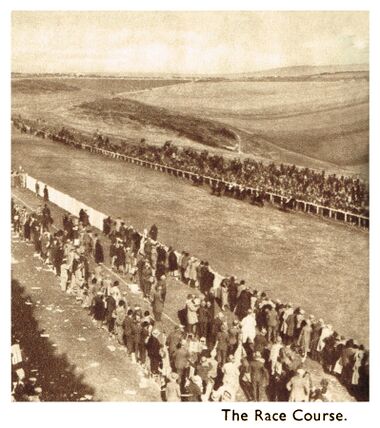 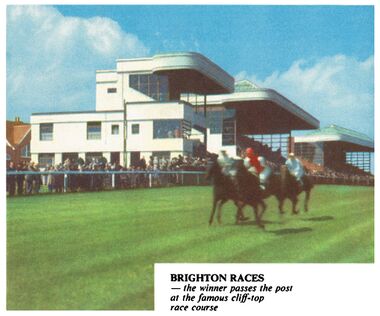 Brighton Racecourse is up high on the hill to the East of Brighton, overlooking the City. As well as racing, the site hosts a variety of other events, including specialist markets (including toy fairs).

Is on the summit of the Downs, to the north and northeast of Brighton, on one of the loftiest eminences in the vicinity of the place. It commands an extensive view of the ocean, the town, and the adjacent country: the fine air coming fresh from the sea is of uncommon purity and salubrity.

The race stand commands a full view of the whole course, and at the time of the races (generally about the latter end of July) is filled with a brilliant assemblage of beauty and fashion, and the whole place is gaily crowded with the inhabitants and visitors of the town.

, vested in the Brighton Corporation, is on the highest part of White Hawk Hill, not far from White Hawk Bottom and Down, east of the town. It can be reached by the Elm Grove or Queen's Park trams. The Grand Stand is large and convenient, and probably commands finer views than any similar structure in the country, its height above sea-level being over 400 feet. Near it is a prehistoric hill-fort known as White Hawk Camp. So long ago as 1777 the "Racing Calendar" refers to races run in Brighton and the neighbourhood. There can be no doubt that the large influx of visitors for which the annually-recurring "Sussex Fortnight" is responsible has indirectly contributed to the prosperity of the town. The races which are held in June and in August, immediately after Goodwood, are managed by the lessees of the ground. The Brighton Race Club was established in 1849.