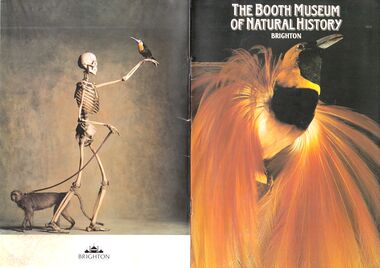 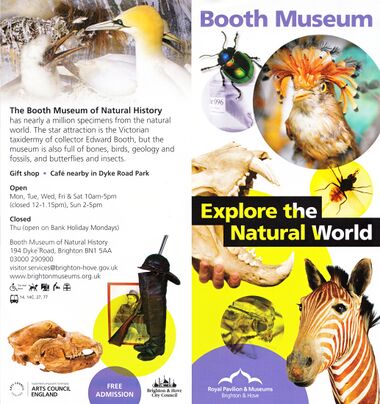 The Booth Museum of Natural History (which appears on older maps as just "Bird Museum") became a public museum in 1890, when Edward Booth, who'd built the museum to house his personal collection of stuffed birds and diaoramas, left it in his will to the town. The museum faces Dyke Road Park.

Booth was a bit of a "shooter" and his custom punt is on display in the museum (which he used to lie in, waiting for the birds to settle down enough for his to be able to pick them off with his rifle).

The museum has quite a narrow frontage, but goes back a long way, and the collection has been extended to include a surprisingly wide range of animal skeletons, butterflies and mineral samples.

The Booth Museum of British Birds

This institution is situated in the Dyke Road, more than a mile from the sea, but, can easily be reached by the Dyke Road tramcars, which pass the door. It is of world-wide celebrity, and should not be omitted from the visitor's programme. The collection was bequeathed by Mr. E. T. Booth in 1890. It has been suggested more than once that the Museum should be moved nearer to the centre of the town; but the building was specially designed with the object of combining the requisite light, airiness, and freedom from damp and dust, and its position on the dry, airy hill outside the town undoubtedly answers the purpose.

Mr. Booth was a gentleman of independent means, born at Chalfont St. Giles, Buckinghamshire, in 1840. He came to live at Brighton about 1865, and gradually filled room after room in his private house with his collection, until in 1874 he acquired the property on the Dyke Road and built himself a house there, with the museum almost adjoining. He died in 1890, and by his will gave the Museum and collection to the Corporation of Brighton, "on the express understanding that they would not alter the interior of the cases, and that they would take the same care of them as he had hitherto done."

Shortly after his death his widow added to the collection by presenting the gunning punt, a collection of guns, rifles, and shooting gear, and the part of her husband's library which related to natural history, together with a large number of valuable birds left uncased by Mr. Booth.

In 1902, the Corporation purchased and added the fine collection of British birds formed by the late Mr. William Borrer, of Cowfold, Sussex, consisting of about 570 specimens. Several other collections have been purchased in recent years, and the Museum contains many rarities.

The original Booth cases numbered 308. This number has since been extended to 370. The whole of the cases are so arranged as to represent the birds in their natural condition, with natural surroundings.