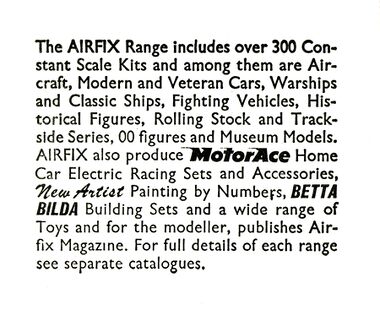 Airfix Modelling is definitely 5 Star Modelling and here's why!

And there's always something new!

As you flip through the pages of this new Airfix Catalogue, you will see details of over 135 constant scale plastic construction kits. From the photographs and brief descriptions you will get an idea of the look and size of the finished models. Not until you begin to build them, however, will you feel the excitement and satisfaction of creating miniature, exact scale models of famous Fighter 'Planes, Tanks and Ships: building the Mayflower or a Yeoman of the Guard, or other kits in the Historical Series, kits which so accurately and skilfully reproduce famous transports and people right out of the history books!

Whether you own a small table-top railway, or a large lay-out, you will also find in the Airfix collection of 00/H0 constant scale Rolling Stock, Trackside Buildings and Figure Series a host of practical accessories designed especially for your needs.

In developing the Airfix range of plastic construction kits, we recognise the special requirements of the advanced modeller as well as the beginner. Although Airfix kits are simple to construct, the enthusiastic specialist will find that adaptations and variations of standard kits are easy for him to make. For example, the Spitfire can be made in many different Mark Nos.; the Sunbeam Rapier can be produced as a hard-top or a convertible, and most of the 00 Gauge Trackside Buildings can be constructed in many different ways.

The standard carrier-borne fighter bomber used by the Royal Navy as well as the German Naval forces, although with different vertical surfaces. This Airfix Kit includes both types of transfers, and with the choice of fin and rudder supplied, either version of this aircraft could be modelled. With a speed of around 630 miles per hour, the Seahawk” is powered by a Rolls Royce Nene 103 turbojet engine.

The most famous fighter plane of all time, the Spitfire is faithfully scaled down in this Airfix Kit. Of the many variations of Spitfires produced, we have chosen the Mk. IX which was introduced in 1942. The Mk. IX was powered by a 1,600 h.p. Rolls Royce Merlin 61 engine and had a maximum speed of 410 miles per hour. It was this machine that gave the R.A.F. superiority over the German Focke-Wulf 190's and the Messerschmitts.

The: first R.A.F. fighter to be equipped with a totally enclosed cockpit, the Gloster ‘‘Gladiator’’ won fame in the defence of Malta. Three of these aircraft, the famous Faith, Hope and Charity defended the Island against hordes of Italian fighters and bombers and was often outnumbered by more than ten to one.

Used by the R.A.F., the Royal Navy, and many commercial concerns, the Airfix Kit of the S.55 Helicopter is supplied with B.E.A. markings. This aircraft is used on regular passenger services in Great Britain and Europe, and is manufactured in this country under licence from American design.

Many versions of the ME 109 were produced for the Luftwafte, and this Airfix Kit is based on the ‘G’ version, which was introduced in 1942. With armament of two machine guns, and a cannon firing through the propeller spinner, this 400 miles per hour aircraft fought many gallant, though not always successful, battles with Spitfires and Hurricanes.

Working closely with the French Resistance during the War, the Westland “Lysander” was the only allied plane able to successfully land behind enemy lines and return to base. This Airfix Kit is supplied with R.A.F. markings and is complete with pilot and observer, full undercarriage, radio antenna and bomb.

With many variations, this Airfix Kit produces a detailed model of the Bristol type fighter, or ‘Brisfit’” as it was commonly known. It proved to be one of the outstanding aircraft of World War | and was in fact still retained in service with the British and foreign Air Forces until about 1930.

The Baron Von Richthofen, famous World War 1 German air ace, was killed in a DR 1 in 1918. With the many different colour schemes used on German aircraft, this popular Airfix Kit provides for the building of many variations.

Designed by the late R. J. Mitchell and forerunner of his famous Spitfire, the original S6B won the "Schneider Trophy" for Great Britain in 1931, at the then fantastic speed of over 407 miles per hour. The original from which the Airfix Kit is modelled, is on display in the Science Museum, London.

The original of this Airfix Model was used by the Royal Naval Air Service in World War 1. It had a maximum speed of 120 m.p.h. and one of these aircraft destroyed the Zeppelin L.53 in August 1918.

Used extensively by the German Air Force in the first World War, the ‘Albatross D.V.’’ sometimes lost its wings in a steep dive. It was replaced in 1917 by the Fokker Triplane. Painted in vivid colours, this model is historical and a striking addition to any collection.

Known as the ‘‘Stuka”’", the JU 87B was used extensively at the beginning of the last war. After heavy losses during the ‘Battle of Britain’, it was replaced by a more powerful JU 87D.

Famous for its part in the “Battle of Britain’, the Hurricane was the first R.A.F. monoplane fighter. This Airfix Kit is of the Mk. 1V which appeared in 1943 and flew in Europe and the Middle East.

Apart from the retractable undercarriage, wing flaps and variable pitch propellers, the D.H. 88 “Comet” claimed fame when it won the Air Race to Australia nearly 30 years ago in 1934. Piloted by Charles Scott and Tom Campbell-Black, the “Comet” flew the 11,700 miles in just under 71 hours. This Airfix Kit model can therefore be justly included in a collection of famous aircraft.

Although still in service at the beginning of the last War in 1939, the Hawker ‘‘Hart'’ was originally introduced in Squadron service with the R.A.F. in 1931 as a standard day bomber. Over 67 versions of this aircraft were built.

Supplied with R.A.F. Training Command markings this Airfix Kit produces a model of the famous ‘Tiger Moth”, an aeroplane which has been widely seen both in the air and on the ground since 1931. There must be very few British pilots, both civil and military, who have not spent many of their early training hours in a “Tiger Moth”.

The initials R.E. stand for Reconnaissance Experimental. Although this aircraft was originally designed for artillery observation in World War | and saw some active service, it was mainly used for carrying out experimental radio communication work, and did a great deal towards the safety air passengers enjoy today. The R.E.8 had a maximum speed of 102 miles per hour and was powered by a 150 h.p. engine.

Used extensively by the Communists in the Korean War, the MIG-15 is probably the widest known of all Russian fighter aircraft and although it is now obsolete it is still used by the Russian and other satellite air forces. This fully detailed Airfix Kit contains both Russian and Polish markings on the transfer sheets.

With a top speed of 437 miles per hour, the “Mustang” is claimed to be one of the fastest piston driven fighters in the World. This Airfix Kit is of the P-51D version, and although used mainly by the U.S.A.A.F., some 250 were flown by the R.A.F. and were known as the ‘Mustang IV". With the particularly long range of 2,080 miles, the "Mustang” is armed with six 0.5 inch machine guns and can carry bombs or rockets.

The 36 parts of this Airfix Kit produce a detailed model of the “Whirlwind”, a single seater twin engine fighter used by the R.A.F. at the beginning of the last War, the existence of which was kept secret until 1942. The plane was used as a fighter-bomber in the R.A.F. operating over Northern Europe in the earlier part of the War.

The first British manned aircraft designed to use the mixed-power formula, the S.R.53 is a research fighter using a rocket motor as well as a turbojet for its power plant. The Airfix Kit of the S.R.53 is fully detailed including two winged tip ‘‘Firestreak"’ missiles.

The F.W.190 was first produced in 1941 and by the end of the War over 20,000 of this plane were produced in different “variations, This Airfix Kit is of the “D" type and apart "from having a longer nose, was considerably more powerful than the earlier version. The kit is fully detailed including pilot, bomb and undercarriage with Luftwaffe markings.

Complete with U.S. Navy transfers, this Airfix Kit makes into a 1/72nd Scale Model of an aircraft which is in use at the present time. Due to its small size it does not need folding wings normally associated with carrier-based aircraft. With a speed of 700 miles per hour, the "Skyhawk", which has the ability to carry an atomic bomb, is powered by a Wright J65 turbojet engine. It is used at the present time in considerable numbers by operational units of the U.S. Navy.

The ability to land and take off in restricted space equip this aircraft for many different uses. This Airfix Kit version is of the type used on Antarctic expeditions and it differs from the standard Auster in that it has additional fuel capacity and a more elaborate radio and direction-finding equipment; very necessary for this type of work. It hag a maximum speed of 123 miles per hour and is powered by a De Havilland Gipsy Major engine. This fully detailed Kit contains 39 different parts.

With a range of 775 miles and the ability to operate from either land or water, the Grumman “Gosling” not only served during the War with the U.S. Coast Guard, and the Royal Navy, but is still in use today, currently used as a charter aircraft capable of carrying four passengers. This Airfix Kit of 37 parts will enable any aircraft collector to build many different authentic versions.

The following 49 files are in this category, out of 49 total.