A cased 1:48 scale model of the wooden "box-framed" "Bleriot XI" or "Onze", built by Philip Veale. 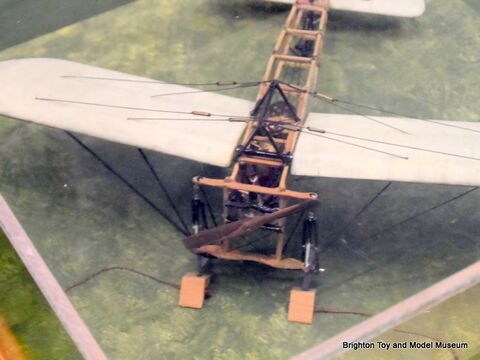 The plane was designed by Louis Blériot and Raymond Saulnier, and had a simple square cross-sectioned cloth-covered body. Although it lacked a vertical stabiliser (or "tail", which normally performs a similar aerodynamic function to the fins at the back of some rockets, or the trailing stick on a firework), the decision to not bother covering the rear of the aircraft's box frame inadvertently provided enough aerodynamic drag on the rear of the aircraft to keep it stable in flight.

Louis Blériot and his "XI" became world-famous when they won the Daily Mail's challenge (and thousand-pound prize) to become the first aircraft to fly across the English Channel, in 1909. Bleriot then switched to the commercial production of aircraft based on the XI, some of which became the first airplanes to see military action.