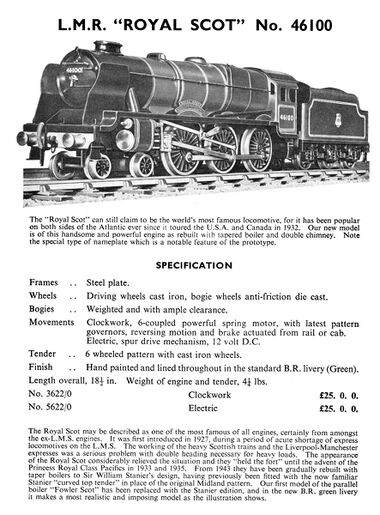 A gauge 0 model of the rebuilt version of the "Royal Scot" locomotive, with BR markings (46100), made by Bassett-Lowke.

The model was introduced by B-L circa 1954 – it appears in the 1954 catalogue, but isn't in the 1952 version (which only includes a version in LMS markings).

It first appeared on the museum layout in May 2016.

By this time, 6100 "Royal Scot" had no longer been the original 1927 6100 "Royal Scot" for some time. When the decision was taken to send their flagship locomotive away on a prestigious US tour, the LMS decided that it was a good idea to send a "fresh" loco, and not the very oldest member of the class, so 6100 and the (otherwise probably identical) 6152 swapped names and numbers.

This model doesn't obviously look like the "traditional" image of the 1927 Royal Scot 6100, as it's a recreation of the locomotive as it was in the 1950s under British Rail.

The number now has a BR prefix and is 46100, the crimson paintwork of the LMS is replaced with BR Green, and the "LMS" initials on the tender replaced with the BR "lion". There are also some serious modifications of the locomotive's overall shape – one of the most distinctive features of the original Royal Scot Class was their aggressively cylindrical boiler, presenting a "big round face", whereas the later Princess Royal class that replaced it had a more elegantly tapered boiler. In the early-to-mid 1940s the "Royal Scots" started being upgraded to take an updated "Stanier" tapered boiler, along with a higher-efficiency "Kylchap" double-chimney, and (because the double-chimneys wasted less steam-pressure and consequently didn't "throw" the steam and smoke as high), a set of side smoke-deflectors.

The oddly-shaped curved "double" nameplate, with "Royal Scot" raised above a second nameplate section with illegible tiny text is a legacy of the US tour. On the actual locomotive, the text reads:

" This locomotive with the Royal Scot train was exhibited at the Century of Progress Exposition Chicago 1933, and made a tour of the Dominion of Canada and the United States of America. The engine and train covered 11,194 miles over the railroads of the North American continent and was inspected by 3,021,601 people. W. Gilbertson – Driver T. Blackett – Fireman J. Jackson – Fireman W.C. Woods – Fitter "

The "Royal Scot" can still claim to be the world's most famous locomotive, for it has been popular on both sides of the Atlantic ever since it toured the U.S.A. and Canada in 1932. Our new model is of this handsome and powerful engine as rebuilt with tapered boiler and double chimney. Note the special type of nameplate which is a notable feature of the prototype.

The Royal Scot may be described as one of the most famous of all engines, certainly from amongst the ex-L.M.S. engines. It was first introduced in 1927, during a period of acute shortage of express locomotives on the L.M.S. The working of the heavy Scottish trains and the Liverpool-Manchester expresses was a serious problem with double heading necessary for heavy loads. The appearance of the Royal Scot considerably relieved the situation and they "held the fort" until the advent of the Princess Royal Class Pacifics in 1933 and 1935. From 1943 they have been gradually rebuilt with taper boilers to Sir William Stanier's design, having previously been fitted with the now familiar Stanier "curved top tender" in place of the original Midland pattern. Our first model of the parallel boiler "Fowler Scot" has been replaced with the Stanier edition, and in the new B.R. livery it makes a most realistic and imposing model as the illustration shows.