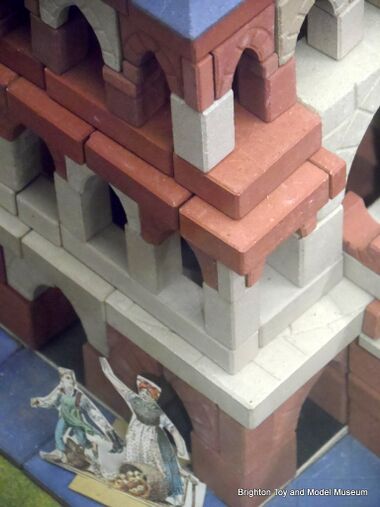 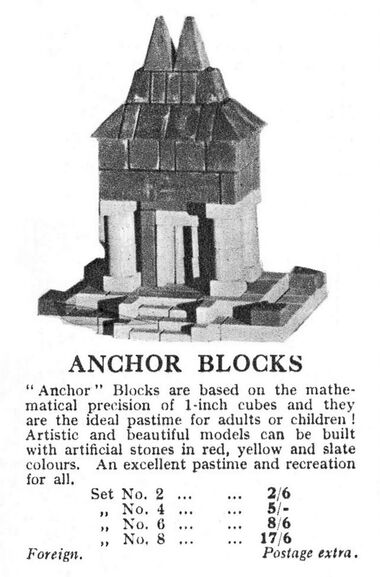 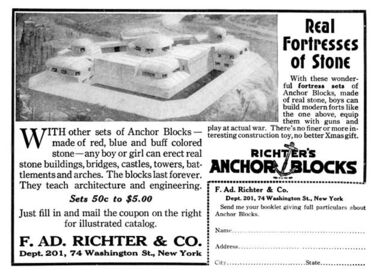 The German-made Anchor Building Blocks/Anker Steinbaukästen were the dominant brand of building blocks before World War One.

The patented blocks were created by the Lilienthal brothers as an "artificial stone" counterpart to Friedrich Fröbel's existing wooden building-block system. The Lilienthals then sold the system to Friedrich Adolf Richter, who marketed and merchandised them.

After WW1, Anchor Blocks's dominant market position in the UK was supplanted by Lotts Bricks.

The sets' blocks came in two sizes - the first blocks were produced to a 20mm grid size, from 1880. Richter introduced a new larger 25mm scale in 1884, which made the blocks less fiddly for small hands, and also increased the stability of larger buildings (but also increased the material cost of making them). The two scales existed in the catalogues side by side until 1906, when the smaller scale stopped being promoted.

The 20mm scale is listed as "KK" (Kleine Kaliber), while the larger 25mm scale that supplanted it is known as "GK" (Grosse Kaliber).

Anchor Stone blocks were founded by the Lilienthal brothers, aviation pioneers, as an alternative to clay and tin blocks and the wooden blocks originally envisaged by Fröbel. To best imitate the Baroque 18th century German stone architecture, Gustav Lilienthal, who invented them in 1878, felt that the material should be stone, and in using a mixture of quartz sand, chalk powder and linseed oil they managed to create such authentic blocks that were also coarser and thus more stable than wooden or clay blocks, as well as appearing more realistic. The brothers struggled to get their invention off the ground, until the rights to the blocks were bought by wealthy businessman Freidrich Adolf Richter.

There is some debate over the extent of Gustav’s involvement in the early days of Anchor Blocks. Some Anchor students claim that he drew designs for the first sets of blocks, "das Bauen" ("the building"), and that he worked for Richter for six months afterwards, but others have questioned the likeliness of this because of Gustav’s prompt departure from Germany, claiming that Richter just added the sets to his "Lehrmittel" line of New Kindergarten products. However, Gustav did extensive design work for the toys in this range, and it is possible that Gustav drew up plans for his own use in his selling efforts and as part of his sets when they were actually sold, but no evidence of his sets being sold before Richter bought the idea has surfaced.

There is likewise very little known about the very early sets between 1880 and 1884, but Richter clearly rapidly capitalised on his new investment. He added a totally new building to his Rudolstandt factory complex for the production of toy building stones in 1882, and around the same time he established a "Kunst Anstalt" (Art Institute) for preparation of building plans, hiring famed artists, illustrators and architects to work on the project. In 1884 he began selling a completely reorganised series of stone block sets.

Before he invented the stone blocks, Gustav Lilienthal was working with his sister in Berlin, and was a skilled artist with a deep understanding of classical design. While the Anchor business was getting off the ground, he emigrated to Australia in 1880 and made a successful living there as an architect. Otto Lilienthal was very successful himself in his aviation pursuits, and was encouraging his brother to join him in Berlin. Gustav returned probably in autumn, 1885, reviving his stone block business with his brother, after Otto had patented an automatic building press under a false name in 1884. This career move would prove to be disastrous, as Richter noticed this new competition and filed a breach of contract lawsuit against the brothers. Gustav and Otto were attempting to start their range using a new block system based on chalk and a casein binder instead of sand and linseed oil, including plans for more realistic roof tiles. Gustav wrote in a letter to Anna Rothe:

" I do not want to take lawful property from anyone. In my conscience I feel no shame at the attempt to make the judicial order ineffective. Absolutely never have we signed a contract with Richter with the intention to never again make stones. "

Gustav had frequent correspondence with Anna around this time, boasting of the success of their business in France, and the decline of Richter’s business in France is not surprising given the anti-German sentiment in France at the time. The brothers won the first lawsuit in 1886, and his patent was invalidated. Competing with another two brothers who had formerly worked for him, the Kellers, Richter stressed in his advertisements that competing brands used poisonous "Quick Lime" whereas his line did not. In March, 1887, he countered with a suit, arguing that the Lilienthal brothers’ patent application in Germany, filed on November the 7th, 1886, was invalid because the stones were identical to his stones.

On November the 5th, 1887, the German Court of Appeals ruled that the validity of the patents were not the issue in the lower court judgement, and the lower court’s breach of contract judgement was upheld. Having spent 15,000 on the suit, consuming all of their funds, the Lilienthal brothers now owed Richter 10,000 marks. Richter agreed to settle for the production equipment instead, but did not force Otto to liquidate his machine shop as well. This supports the argument that Richter was less interested in money and in defeating the brothers in court, and more interested in defeating his competition in the marketplace, and was very confident that he would do so. Regardless, this proved to be the end of the Lilienthal brothers’ stone –making business. Otto and to a lesser extent Gustav contributed a lot to the field of aviation, and the Wright Brothers acknowledged Otto as a huge influence, but Otto’s life was tragically cut short ten years after their lawsuit with Richter in 1896 when his glider stalled and crashed, and he died from resulting injuries. Gustav continued to be a successful architect in Berlin, where his work still stands to this day.

Anchor passed its peak due to the setbacks of the First World War, its aftermath and the resulting anti-German climate and boycotting of goods, as well as Richter’s death in 1910. In 1953 Anker-Steinbaukasten was reorganised as a state-owned company, and in 1963 production of blocks stopped. On September the 15th, 1995, production restarted at the Rudolstadt factory, where the blocks are still manufactured using the original moulds and composition.

Lott’s Bricks were very much a product of World War One and the resulting anti-German climate. Anchor bricks were hugely popular at home and abroad before hostilities broke out, and before long there was a desire to fill this hole in the market with a British equivalent.

Ernest Lott, whose children played with the Anchor blocks, seized the opportunity, creating a simpler version with the Lott's Bricks brand. Anti-German sentiment is evident in the promotion in magazines, such as the trade journal Games and Toys, which stated:

"we think this line, which is of British manufacture, will prove itself to be a far better thing than anything Richter evolved. Our readers were, of course, very familiar with the German production, and know what extremely crude and unsightly buildings they made."

Keep the Children Happy till Bedtime

ANCHOR BLOCKS provide just the amusement every boy and girl loves to engage in. They keep the children entertained hour after hour, and night after night.

Anchor Blocks are miniature bricks for the erection of buildings of every class, from an unpretentious cottage to the stately cathedral. They encourage a child to exercise orginality, and an ingenious child will erect many an interesting building after successfully manipulating the set designs. Anchor Blocks are a splendid juvenile training in proportion, symmetry, and good taste.

There are two series : Red and Green. Red is designed for stone construction; the Green combines stone and metal construction.

Both series of Anchor Blocks are supplementary, and lost blocks may be replaced by simply quoting their numbers.

Are used by architects for developing plans, and are a fascinating hobby for adults as well as children.

The toy departments of all the big stores stock or will get Anchor Blocks for you. If you have any difficulty in obtaining, write to:- W. Seelig, 23 White Street, Moorfields, London, E.C.

The museum has a large cabinet shelf dedicated to Richter's Anchor Blocks, with one large bridge, one large bridge-and-building, and a stand-alone building, all made from blocks from a variety of sets, along with some Anchor stone puzzles. There is also a selection of set boxes and miscellaneous literature on display.

There is a further collection of additional Anchor blocks sets in storage in our archives, but given the size of these boxes, it's difficult to find room to display more than just a selection.