This was made by Märklin in 1999 as a limited special edition for dealers to commemorate Märklin's anniversary. 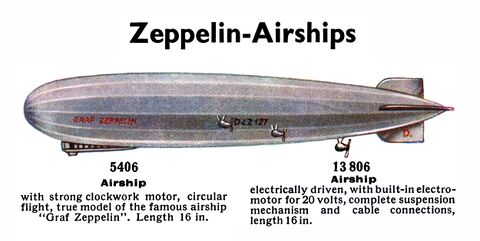 Count Ferdinand von Zeppelin patented his design for a rigid airship frame enclosing a series of gas bags in 1895.

Zeppelins were used to bomb England in WW1, and were initially quite successful. Their altitude made it difficult for biplanes of the period to reach them, and their bulbous shape and lack of sharp detail made them difficult to see and target, especially at night when drifting slowly at a similar speed to surrounding clouds. Zeppelins could still be spotted by their engine noise, but a Zeppelin, unlike conventional aircraft, also had the option of switching off its engines to drift silently with the wind towards its target.

The tide of success began to turn against the Zeppelins around mid-way through the War, when the British network of anti-Zeppelin defences became so concentrated that although the overwhelming majority of bullets and shells never hit their targets, the sheer quantity of ordnance used meant that the odds of a Zeppelin surviving its mission began to drop. Another factor was the switch by anti-Zeppelin aircraft to using incendiary, explosive and "tracer" bullets, once it was recognised that just punching neat bulletholes in a Zeppelin wasn't enough to destroy it - the bullets also needed to be able to ignite the escaping hydrogen gas. Once a Zeppelin had caught fire, there was no real way to save it.

Zeppelins reappeared after the War as a form of civilian air travel. The Zeppelins seemed especially suitable for luxury transatlantic trips - passengers might have been anxious about using early conventional aircraft over a ocean that gave nowhere to land if an engine failed, and the idea of a aircraft with a luxury saloon that stayed aloft if even if all its systems failed must have been reassuring. However, the Zeppelins never really recovered the public's confidence after the loss of LZ 129 Hindenburg in New Jersey in 1937. Even though two-thirds of the passengers survived the crash, the Hindenburg had the additional misfortune of it's conflagration being captured on film and then relayed to the American public along with the appalled commentary of the reporter who had been on location with the film crew. The resulting footage was seared into the American consciousness in a way that was probably not matched until the attack on Pearl Harbour, or until 9-11.

The Museum's model is suspended up high above the 1930s model railway layout, on two wires. It was installed in April 2013.