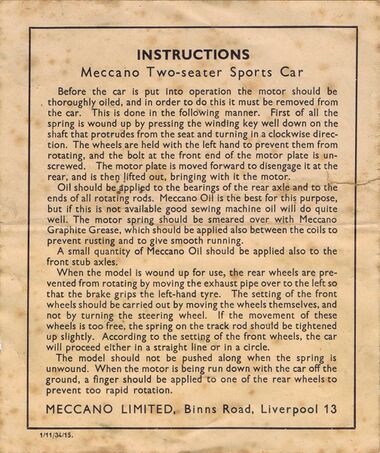 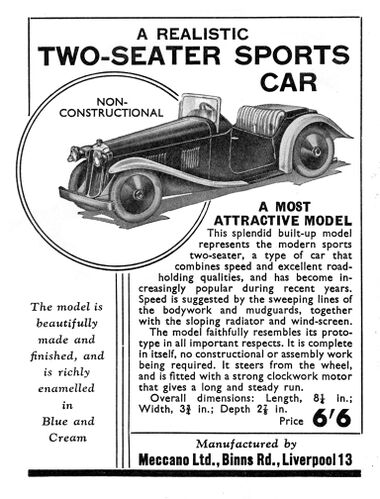 The model has blue bodywork and hubcaps, cream running-boards, white tyres and two red seats. Its catalogue entry lists it as being 8.5 inches long.

Although this was sold under the Meccano name, it was a single-piece toy car, and not a construction kit. However, these dedicated models were often associated with the contemporary Meccano Motor Car Constructor sets, and were sometimes advertised alongside them.

The toy is scheduled to go on display in February 2016.

" This realistic model of a two-seater sports car is beautifully made and finished. It is fitted with a strong clockwork motor that gives a long and steady run on each winding.

The model faithfully resembles the modern type of sports two-seater car. It is available in three different colours – red, blue and cream. Non-constructional. "

A MOST ATTRACTIVE MODEL
This splendid built-up model represents the modern sports two-seater, a type of car that combines speed and excellent road-holding qualities, and has become increasingly popular during recent years. Speed is suggested by the sweeping lines of the bodywork and mudgyuards, together with the sloping radiator and wind-screen.

The model faithfully resembles its prototype in all important respects. It is complete in itself, no constructional or assembly work being required. It steers from the wheel, and is fitted with a strong clockwork motor that gives a long and steady run.

The model is beautifully made and finished, and is richly enamelled in Blue and Cream 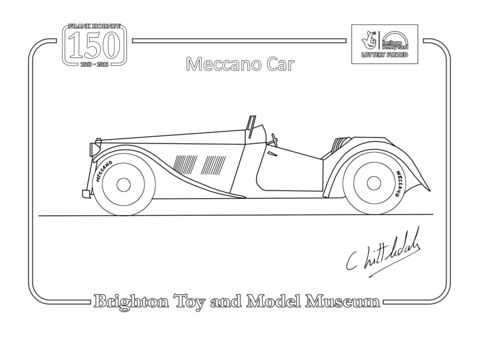