A short brown 00-gauge model Timber Truck (or "Rungenwagen") with a continental-style brakeman's cabin at one end, made by Marklin in the later 1930s.

The wagon was also available preloaded with wood, as model 372 G. 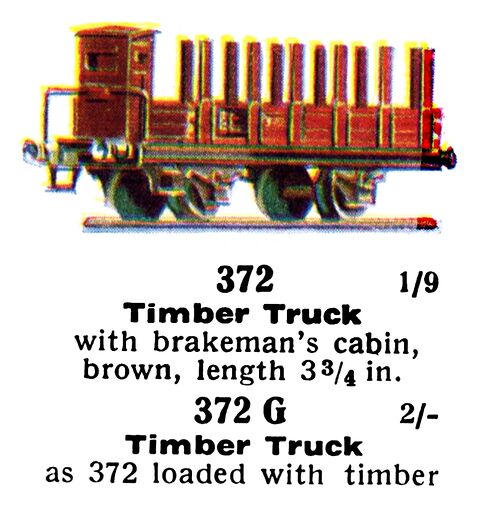 The "Rungenwagen", or "Stake Wagon" was a flatbed wagon with its perimeter surrounded by vertical spaced wooden stakes. It was usually used for moving timber, but might also be used to secure other troublesome largeish loads such as barrels.

These wagons allowed a combination of security with the ability to access the bottom of the load (e.g. for securing lifting ropes, without obstructing walls getting in the way. Drop-side wagons wouldn't be so useful with awkward timber loads, as one would have to drop a side-wall to be able to get at the load for handling, and as soon as the wall was dropped, the load would be unsecure and potentially unsafe. The use of a "cage" allowed easy access, and the lack of reiforcing horizontals at the top of the cage guaranteed that a roped load could be lifted clear without snagging.