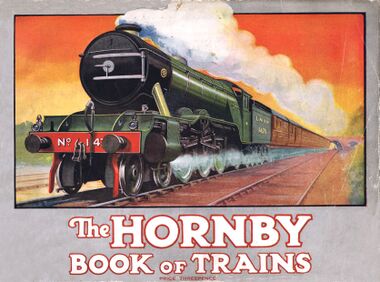 The Hornby Book of Trains first appeared in 1925, price threepence.

The book was undated, perhaps so that it could be kept in circulation for a while without seeming to go out of date, if no further issues were produced.

The impression that the 1925 issue was designed as a one-off was also strengthened by its ambitious decision to use the "editorial" section to attempt to describe and illustrate the entire history of the steam locomotive.

However, the experiment clearly was a success, because more issues started appearing, yearly.

Since only three digits are visible on the front of the loco, this image is sometimes casually mistaken for a picture of the A1/A3 Flying Scotsman (which originally held the number 1473, before it changed to 4473). However, although the "Scotsman" might have been a more obvious choice, the loco tender clearly says 1471.