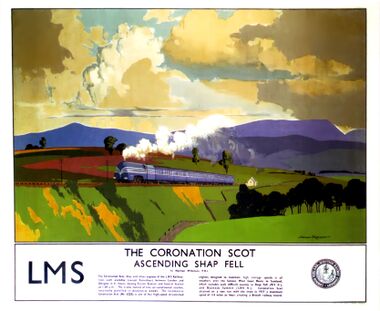 "The Coronation Scot / Ascending Shap Fell" is a classic piece of poster artwork produced in 1937 by Norman Wilkinson (1878-1971). Due to its size, it's only represented in the exhibition by a small reproduction.

The lower third of the poster has a block green foreground showing an embankment with some dark trees over to the right, behind which is a brown and green hill, some distant blue mountains, and then, in the top 60% of the poster a big sky with variously-shaded clouds.

The Coronation Scot is shown as a comparatively small piece of the poster, the length its full nine-car train occupying less than a third of the poster width as it climbs the embankment under full steam, from right to left, slightly approaching the observer.

The poster's emphasis is on the scale and the grandeur of the countryside that the train is moving through.

The choice of Shap Fell as a location was based on more than just the nice scenery.

Shap Fell was one of the most challenging sections of the LMS track from London to Glasgow, and although there wasn’t a station at Shap, LMS railwaymen knew the section of track very well indeed, since the incline near the Shap signalbox was so steep that it could require a pair of engines to bring the train home, and if drivers didn’t build up enough speed and steam before they attacked the Shap, they risked getting their train stuck on the slope.

The power of the new Coronation Class locomotives allowed a single engine to haul a long passenger train up "Shap" alone, allowing a non-stop service from London that didn’t need to wait around for auxiliary engines to be coupled and uncoupled. Showing the Coronation Scot ascending Shap Fell, alone, was a way of demonstrating the new locomotive’s power and the technological progress that LMS had made.

Even with the new Coronation locomotives, Shap remained a challenge to drivers and firemen. It was critical to build up enough speed before hitting the this section of track, and in icy weather there was the additional problem that if you tried to drive the train too hard on the slope, the wheels could start slipping and spinning, and you’d lose traction, and power and speed. On the other hand, if you didn’t drive the train hard enough, you’d lose speed, and even if this didn’t stall the train, it’d lose valuable time on the schedule that would have to be made up later, or else … horrors … the train could be late.

The ascent through Shap also needed the fireman to work very, very hard to keep up with the rate at which the coal-hungry Coronations had to burn fuel in order to supply the required amount of power.

The Shap ascent comes after Tebay and Dillacar, and before Penrith.

Norman Wilkinson was an acclaimed artist of shipping scenes, who also managed to produce over two hundred railway posters and posters of railway scenes during his career. His railway-poster work was characterised by a mixture of solid, almost featureless blocks of colour typical of simple stylised silkscreen printing, contrasted with areas of high detail and/or more complex shadings. The overall results referenced the traditions of classic poster design without slavishly following the usual poster-style conventions and simplifications.