A black, electric, 4-4-2, gauge 0 "Southern" tank locomotive, markings E 492, with a faint green outline. The loco's front plate has a front lightbulb and "HORNBY" as an arc of red and gold lettering above it.

This particular loco, in black (Southern Railway, E220 Special, electric), is very rare - the going rate at auction for a really good example (excellent to mint condition) is currently listed as being over three and a half thousand pounds. By contrast, the GWR version (in green) lists at about a tenth of that price in the same condition.

The No.2 Electric Tank Locomotive

The electric versions of the No2 Special Tank locos appeared in 1933 (as the "No.2 Electric Tank Locomotive", with "Electric" presumably considered to make the word "Special" superfluous). At about the same time (1933) , the model is supposed to have dropped the "E" from "E492" , so this loco would seem to date from 1933. 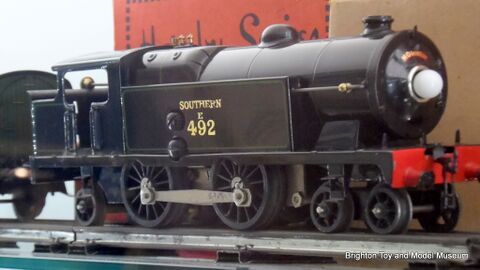 Letter suffixes were initially used by Southern to distinguish between locomotives produced at different locomotive works that had been assigned the same number.

The "E" in "E492" stands for Eastleigh Works. In the early Southern liveries from 1923, E, A and B were initially used as prefixes, with A standing for Ashford Works and B for Brighton Works.

Later, the letter prefixes were dropped, and several of the works' locos acquired an extra front digit to their numbers, instead. 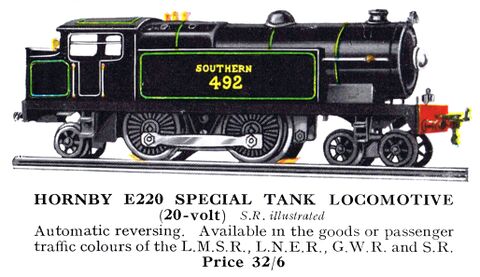 Colour catalogue image of the E220 Electric version of the No.2 Special Tank loco Southern 492, 1934. Note the missing "E" prefix

Black-and-white catalogue image of Electric No.2 Special Tank loco E 492, hauling a goods train, circa ~1939. Earlier versions of the advert do include the word "special", omitted here. 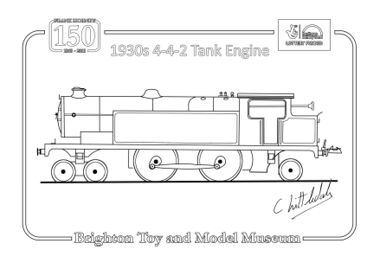 While there really was a genuine tank locomotive manufactured at Eastleigh Works with the number 492 (in 1921, making it a reasonably "fresh" loco ID), the real 492 seems to have been a G17 Class 4-8-0T locomotive, with differently shaped tanks, a different wheel configuration, and other details diverging from the Hornby model.

While the No.2 Special tank locos were available in the liveries of the Big Four, the shape seems to be based more on the shape of a GWR tank loco than on something from Eastleigh.