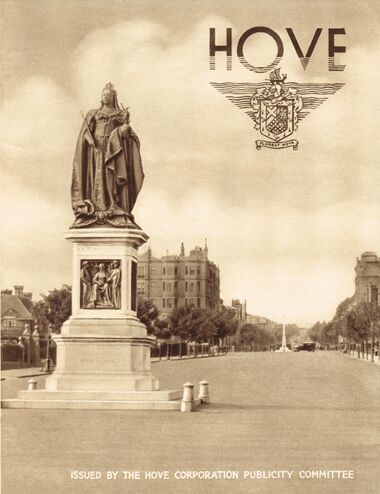 Hove's nice bronze Grade-II-listed statue of Queen Victoria (by Sir Thomas Brock), was commissioned to celebrate Victoria's 1897 jubilee, but it took a while to be organised, and a while longer to build, and when it was finally unveiled in 1901, Victoria had unfortunately just died ... which put rather a dampener on the celebrations that would otherwise have accompanied the event.

In a conspicuous position at the foot of Grand Avenue, with a fine perspective behind, is Hove's memorial of the Diamond Jubilee. The Statue of Queen Victoria is a fine work in bronze, on a marble pedestal with panels representing Empire, Commerce, Education and Science and Art. The statue was designed by the late Sir Thomas Brock, R.A., K.C.B.