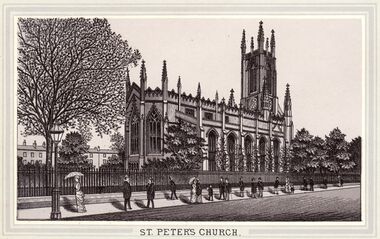 St Peter's Church (1827) sits at the end of Grand Parade, and is at the bottom of Trafalgar Street. It's an important landmark for visitors coming to Brighton via the Station – the easiest way to get to the pier area via Grand Parade is "Head down Trafalgar Street, and turn right at the end, by the Church".

1825: "Topographical Sketches of Brighthelmston and its Neighbourhood":

The increased population of Brighton, as well as the required accommodation for its numerous visitants, had often suggested the expediency of erecting a New CHURCH; and, at length, the Commissioners agreeably to the general wish, have commenced an elegant building, near the northern entrance of the Town, in a fine open situation, between the London and Lewes roads. The first stone was laid with great ceremony, on the 8th of May, 1824, by the very reverend Dr. Carr, Vicar of Brighton, and Dean of Hereford, now Bishop of Chichester. It is designed in the Pointed, or Gothic, Style, as vulgarly called. Mr. Charles Barry being the Architect; and Mr William Ranger the Builder. When complete, it is to be dedicated to St. Peter.

This splendid Gothic building, erecting on the Level, at the entrance of the Town from the London Road, is to be dedicated to St. Peter, whose name it is to bear. Its appearance at present gives but a faint idea of what it will be when completed. There is also a new Chapel of Ease erecting, between Brighton and Kemp Town.

– This handsome Gothic building was erected in 1827. It is situated at the north end of the town, at the junction of the London and Lewes roads, and is a great advantage to the inhabitants of that district, being the only place of worship of the Established Church in that part of Brighton. The interior is divided by three aisles, the principal of which runs through the body of the church, leading from the chief entrance to the altar, the others lead to the pews under the gallery. The building, which is of Portland stone, is embellished with various decorations of Gothic architecture; and, from its combined elegance and situation, forms one of the most striking features of the place. The costs of the building are estimated at about £15,000. The Curate is the Rev. Thomas Cooke. It is in the patronage of the Vicar of St Nicholas.

, standing between the Victoria Gardens and the Level, has since 1873 been the Parish Church of Brighton. It is in the Perpendicular style of the fourteenth century, and was erected in 1824, from the design of Sir Charles Barry, at a cost of £20,000. It has since been much enlarged. Several of the windows are filled with stained glass, and the tower contains a fine peal of ten bells, said to be the largest in Sussex. They were given in 1914 by Mr. John Thornton Rickman of Lewes. The donor's name is inscribed on the great tenor bell, which weighs 25 cwt.