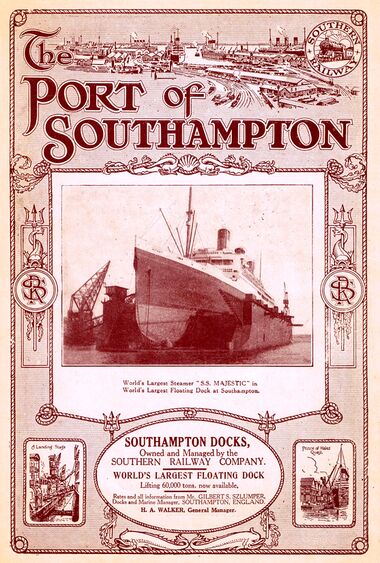 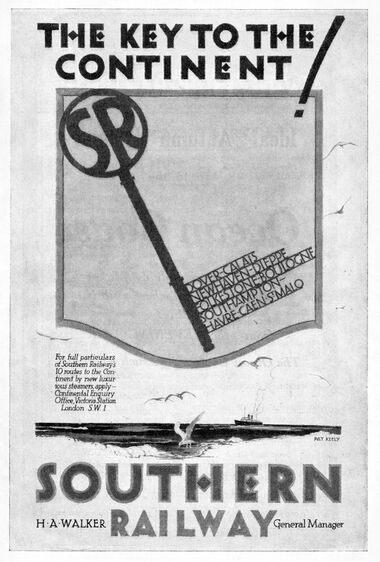 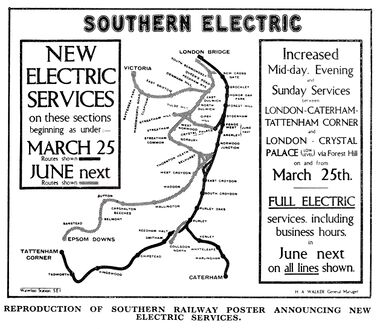 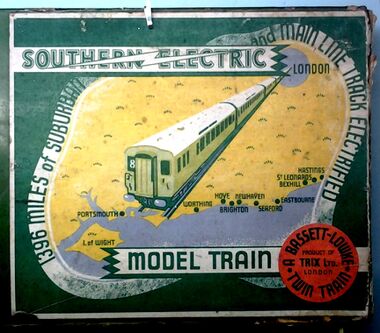 1939: Southern Railway map, TTR "Southern" electric train set box artwork. This was a classic example of the SR publicity department hooking up with an outside company for mutual promotion. The train set box featured a map of popular Southern destinations, and was also specially produced in green to reference the Southern livery. [image info] 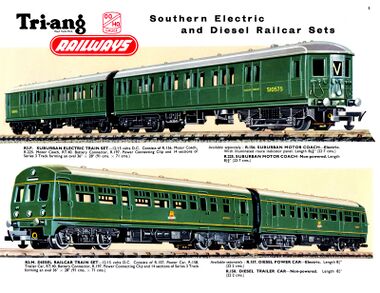 The Southern Railway, "SR", (1923-1948) was one of Britain's "Big Four" railway companies until the four were merged after World War Two to create British Railways (BR). After the merger, the operating subnetwork was known as "Southern Region".

Southern operated in the area between between London and the South Coast, and although the railway had less track-mileage than its competitors, its ownership of the routes between London's large population and the nearest section of coastline made Southern very profitable, with most of its profits coming from passenger services.

Southern built on its ability to shuttle passengers quickly to the southern seaside resorts by creating and promoting a fleet of named Pullman train services, the "Belles" and by mounting high-profile advertising campaigns. The company also benefited from their southern location by being able to run connecting services such as the Golden Arrow, which took holidaymakers to the coast, and then to a ferry service that connected to a European train service that could then take them to even sunnier places like the South of France.

Southern was created in 1923 merging of a number of smaller southern railway companies, primarily the London, Brighton and South Coast Railway (LBSCR) which had the London-to-Brighton route, the London and South Western Railway (LSWR), and the South Eastern and Chatham Railway (SECR).

With a large passenger clientèle and comparatively short routes, Southern was able to pioneer the (expensive) modernisation of British main-line track to support electric locomotives, with the electrified London to Brighton line running distinctive all-green "EMU"s ("Electrical Multiple Units") and the prestigious brown-and-cream Brighton Belle service, with the world's only electric Pullman train.

THE opening on 1st January of the Southern Railway's electrified extension to Brighton and Worthing was an event of outstanding importance in British Railway history. In the various electrification schemes carried out previously only local suburban lines had been dealt with; now a great leap forward has been taken and main line express electric services have been put into operation. The event is important in itself and also in the influence it will have in promoting other schemes of main line electrification.

Truly we are living in a wonderful age, and the Southern Railway and its able officers and staff are in the very forefront of progress. In a difficult time they have dared to go forward with this colossal scheme, which has cost close to £3,000,000. They have inaugurated a new era in railway transport.

Although all four major railway companies invested in high-quality "artistic" poster artwork, Southern in particular was able to mount a high-profile campaign aimed at encouraging potential holidaymakers to see the South Coast as Britain's sunniest seaside resorts, with their "Sunny South Sam" character extolling the joys of a day out to the seaside.

Southern also took the unusual step of creating a proper public relations department, and their poster campaign explaining to customers that the disruptions caused by electrification work were in the long-term interests of travellers was surprisingly effective.

Again, due to its location, Southern Railway played a major part in the mobilisation of troops and equipment for the D-Day landings toward the end of the Second World War.

The following 63 pages are in this category, out of 63 total.