A contemporary commercial glovepuppet of Harry Corbett's "Sooty" the bear (not to be confused with more modern restyled glovepuppet versions).

Sooty first appeared on television in 1952, accompanied by Harry Corbett on a range of children's TV shows, and also spawned children's annuals, comic strips, stage shows and animated cartoons. The franchise was later taken over by Harry's son Matthew Corbett, and then by Richard Cadell. 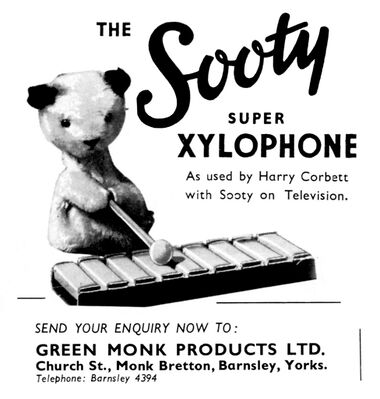 Sooty was a bright yellow-orange bear with black ears and nose, which made him easily recognisable on black-and-white tv sets. Since Harry Corbett wasn't a ventriloquist, Sooty was silent, and had to express himself either by whispering into Harry's ear (at which point Harry would relay what had been said, "What's that, Sooty, you don't think that the cake is ready yet?"), or by very insistent body language, which often involved things being hit or thrown or smeared on the unfortunate Harry, to the delight of watching children. Sooty was at times a very naughty and destructive bear, who tended to compensate for his lack of an audible voice by noisily banging whatever he was holding in his paws against whatever happened to be nearby.

Sooty also did magic, and would wave a magic wand while Harry said the words "Izzy, wizzy, let's get busy", but his magic had a habit of making a mess.

Sooty was joined in 1957 by his friend 'Sweep, a grey dog with long black ears, a slightly forlorn expression, and fondness for bones, sausages, and playing the saxophone. Sweep also didn't speak, but could make highly expressionful (and often increasingly outraged) squeaky noises, provided by Harry's brother Leslie Corbett with the help of a saxaphone reed.

The eventual third member was Soo bear, a panda whose black and white patches again gave high contrast on low-resolution television sets, originally voiced by Marjorie Corbett. Where Sooty was the anarchist who always seemed to get away with things, and Sweep was the likeable but slightly blundering friend, Soo was the calming voice of reason in the group.

Although other characters were introduced to the group over the years, and Sooty was the title character, the shows were often misremembered by viewers being "The Sooty and Sweep Show", due to the strength of the polar-opposite double-act between the totally silent Sooty and the very noisy Sweep.