This piece represents a milestone in the history of British model railways, as it was very early example of a locomotive ordered in quantity. The model came about when the Great Central ran a competition in their timetable, with the loco (based on GCR-supplied plans) as a prize. Subsequently, the piece was available both through Bassett-Lowke and from the Great Central Railway. 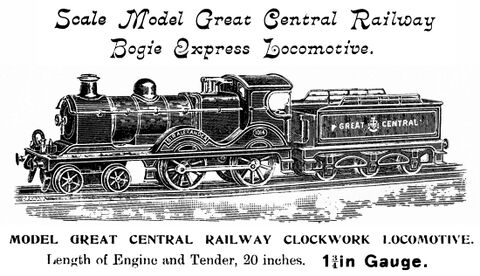 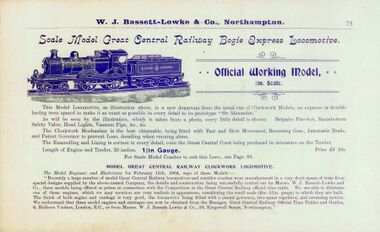 This Model Locomotive, as illustration above, is a new departure from the usual run of Clockwork Models, no expense or trouble having been spared to make it as exact as possible in every detail to its prototype "Sir Alexander."

As will be seen by the illustration, which is taken from a photo, every little detail is shown. Belpaire Fire-box, Ramsbottom Safety Valve, Head Lights, Vacuum Pipe, &c., &c.

The Clockwork Mechanism is the best obtainable, being fitted with Fast and Slow Movement, Reversing Gear, Automatic Brake, and Patent Governor to prevent Loco derailing when running alone.

The Enamelling and Lining is correct in every detail, even the Great Central Crest being produced in miniature on the Tender.

For Scale Model Coaches to suit this Loco, see Page 89.

The Model Engineer and Electrician for February 11th, 1904, says of these Models :–

" Recently a large number of model Great Central Railway locomotives and corridor coaches were manufactured in a very short space of time from special designs supplied by the above-named Company, the details and construction be8ing successfully carried out by Messrs. W.J. Bassett-Lowke and Co., these models being offered as prizes in connection with with the Competition in the Great Central Railway official time table. We are able to illustrate one of these engines, which we may mention are very realistic in appearance, considering the small scale (3/8in.-1 3/4in. gauge) to which they are built. The finish of both engine and carriage is very good, the locomotive being fitted with a patent governor, two-speed regulator, and reversing motion. We understand that these model engines and carriages can now be obtained from the Manager, Great Central Railway Official Time Tables and Guides, 6, Holborn Viaduct, London, E.C., or from Messrs. W.J. Bassett-Lowke & Co., 20, Kingswell Street, Northampton. "