1860 map of the coast around Brighton, from Shoreham (left) to Rottingdean (right) [image info] 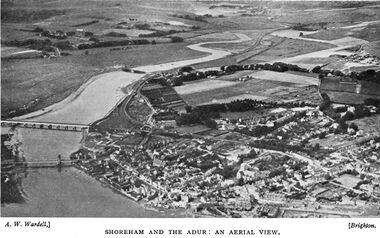 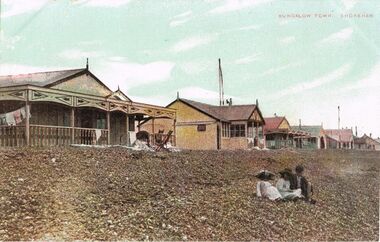 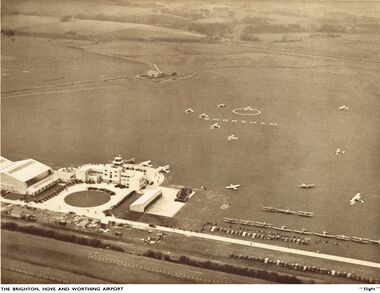 Shoreham is just to the west of Brighton and Hove, at the mouth of the River Adur.

The beachfront was for a while a "hotspot" of very early British filmmaking, with studios established there to catch the uninterrupted light from the South.

New Shoreham lies about six miles west from Brighton, with which it has a railway communication eight or nine times a day. Its well frequented harbour, on the river Adur, is the best on this part of the coast. Its ancient church, originally cruciform, and one of the largest in the neighbourhood, is an interesting specimen of Norman architecture. The town is celebrated for ship-building, has a custom-house, and a curious old market-house standing on Doric pillars. Crossing the Adur, is an elegant suspension bridge, built at the cost of the late Duke of Norfolk. On the road from Shoreham to Bramber are the Swiss Gardens beautifully laid out, and a favourite resort of pleasure parties from Brighton. They have a lake, with boats – a refectory, a concert-room, a temple, an observatory, &c. – Bramber, though once a town of some importance, giving name to the Rape in which it stands, now contains hardly more than twenty houses. On an eminence at the north-east of Bramber-street, are the ruins of a castle. – The now inconsiderable village of Old Shoreham lies about half a mile westward from the new town.