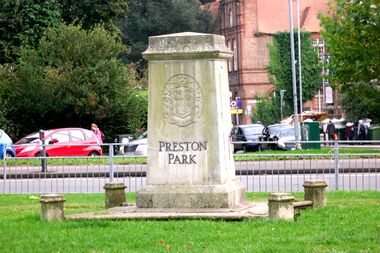 Pillar at the southern entrance to the park [image info]

An almost identical pillar is at the further North Preston Road entrance to the park, but set into grass without the surrounding base.

The Southern pillar tends to be explained by locals as marking the location of the Romano-British Villa whose remains were found nearby, in 1877, just by the Southern corner of Preston Park.

Since this discovery was just a few years before the creation of the Park, and presumably shortly before the creation of the two pillars, it's possible that the local folklore might be correct – the pillar used to have a second plaque on the other side, and we're pretty sure that this missing second plaque had text referring to the villa (we've been told quite emphatically, that it had). Considering the timing and proximity, it might arguably have been odd for the second plaque not to have mentioned the villa.