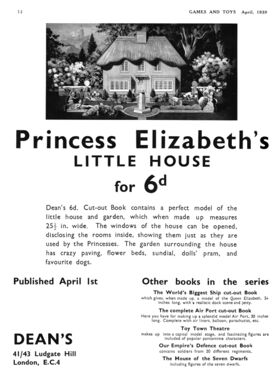 Officially named Y Bwthyn Bach (The Little House in Welsh), the 24-foor-wide playhouse is a working scaled-down "Wendy House" based on the design of a traditional two-storey Welsh cottage, and was the private playspace of Princesses Elizabeth and Margaret, with a "no adults allowed" rule.

From the point of view of the Royal Family, the house let the princesses play at being normal people with a normal house, and gave them fond experiences of living in something other than a grand stately home or a palace. From the point of view of the Welsh craftspeople who created the house, it would help the princesses to think fondly of Wales (which was a region of high unemployment) if they ever came into a position of power and influence – which in the case of Princess Elizabeth turned out to be a surprisingly good bet, as a short succession of surprisingly brief reigns (including one abdication) resulted in her becoming Queen Elizabeth II.

The house was designed by Edmund Willmott and built from spare materials left over from the building of a hospital. It was initially shown at the Daily Mail's Ideal Home Exhibition (after frantic re-thatching and rebuilding work prompted by a fire en route), and was then installed in the grounds of the Royal Lodge, Windsor.

We know of two commercial products that were inspired by the Little House: