When Hornby Dublo was first launched there were just two basic types of Dublo train set, an LNER streamlined passenger train set and a goods train set, with each being available in electric and clockwork versions. The goods loco became available with different railway company markings, but the passenger set was available in LNER-only (because the model was clearly such an LNER-specific train), the only variation being whether the locomotive innards were clockwork or electric (and of course, whether the supplied track included a centre rail, and the presence or absence of an electric speed controller).

The clockwork sets are notable because the Dublo clockwork locos were only produced for a few years, and didn't reappear when production restarted after World War Two, by which time Dublo was an "electric-only" model railway system – some Dublo enthusiasts who only encountered the system after WW2 are quite surprised to find that there ever were clockwork locomotives in the range. 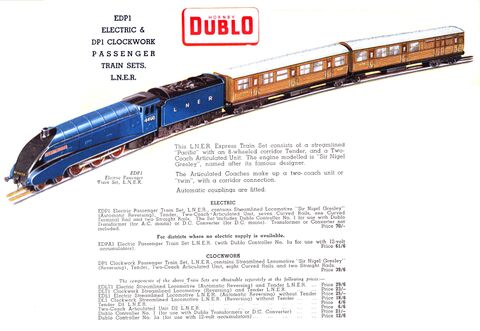 The electric version of the train set was distinguished by an extra "E" on the front of its model number (EDP1).