Although the main Stuart Turner stationary engine range was initially numbered, with the No.3 and No.6 being compound engines, the adaptation to these two designs meant that the numbering system became too unwieldy, and their replacements ended up being given more descriptive names, leaving behind a gap in the number-sequence.

Later engines were also increasingly designed by outsiders and published in magazines such as Model Engineer magazine before Stuart Turner put the designs into production, and these designers would tend to name their creations. 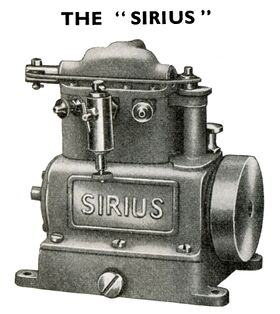 THE "SIRIUS", For Ordinary or Flash Steam Boilers

In the "SIRIUS", particular attention has been given to the design of the valve gear and steam passages, with the result that the engine develops great power with a surprisingly low steam consumption. Our own tests show 0.4 b.h.p. is developed at 2,800 r.p.m. at a steam pressure of 50-lb; steam very moderately superheated.

The Engine is a most interesting one to construct. No part is too small to handle easily; it can be machined on a 3½-inch lathe. 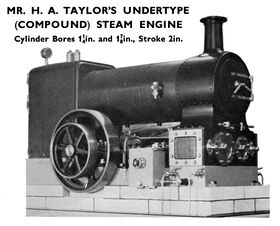 The Undertype Steam Engine, which enjoyed considerable popularity during the second half of the last century, has long been attractive to Model Engineers. In 1907 we listed a set of castings and materials for a unit of this type, the cylinder bore being ½ in. and the stroke ¾ in. A few years later we introduced a two cylinder, of Model Engineer design, and both these engines remained in our range until after the First World War.

We now offer a complete set of the basic castings and drawings for a version, produced by Mr. H.A. Taylor, after a model originally designed by Henry Greenly in 1901. The Model Engineer published a detailed description of the building of this handsome model in a series of articles in 1971/2.

As the size of the baseplate may present some machining difficulties we can supply this with top and bottom faces accurately milled leaving only drilling and tapping to be done. (Specify "cc" in schedule when ordering). 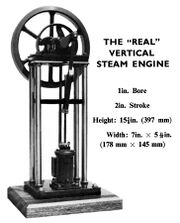 We supply a complete set of castings only.

The designer of this model, Mr. Andrew smith, based it on an 8 inch cylinder bore colliery engine of a type common for factory and workshop use in the middle of the last century. It is a relatively simple engine for the beginner to build. 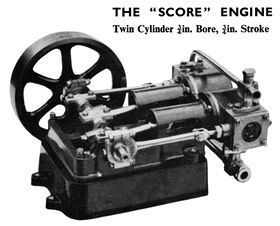 We have been asked many times to produce a horizontal two cylinder engine of the industrial type. The Score is the answer. Closely related to the Double Ten, it is still so distinctive as to be a most attractive engine in its own right. The 3 9⁄16 inch (90mm) diameter flywheel looks really impressive. The engine is close enough in appearance to a paddle steamer engine to be used in radio-controlled ship models of this type. Our Nos. 1035 or 504 boilers are ideal for the steam supply. 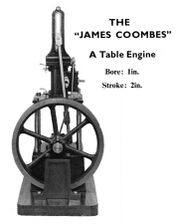 A complete set of castings and materials are supplied together with general arrangement and machining detail drawings.

Mr Andrew Smith's design is based on a table engine that is reputed to have worked for more than a century at a Bristol colliery. The original was about 10 inch bore and 24 inch stroke, developing perhaps 20 h.p. with 60 p.s.i. steam pressure and running up to some 40 r.p.m. The model is approximately one inch to the foot scale (1:12).

The book, "Building the James Coombes Table Engine" (36 pages) gives detailed instructions with illustrations. To assist the beginner we can machine the cylinder bore and the flywheel as with the Beam, Real and Victoria engines. Our illustration shows the engine with governor. 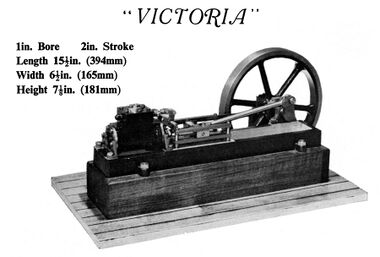 The "Victoria" follows closely the design of the low pressure horizontal engines used in the mid-19th century for workshop and factory power. It is a simple model to construct, but to assist the beginner we can machine the cylinder bore and front cover and turn and bore the flywheel.

This engine is an elegant sight when operating. The large flywheel allows it to turn smoothly at low speed, when the long stroke can be appreciated. We can recommend Mr Andrew Smith's 40-page book "Building the Victoria" which is available from Model Department.

The Twin Victoria is a handsome development of the Victoria engine, designed by "Tubal Cain". The engine is constructed principally with additional standard Victoria engine parts and no more complex machining is involved.

As with the Victoria, we are able to machine the cylinder bores and front covers on request. 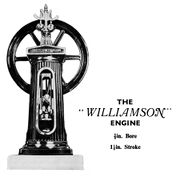 This interesting and attractive model by "Tubal Cain" is a replica of a vertical engine made in the last century by the Kendal firm of Williamson Brothers. The original was about 8 ft. 4 inches (2.54 m) high and ran at 130 r.p.m. with approximately 30 p.s.i. steam pressure, cylinder bore 6½ inch, stroke 14 inches. It was exhibited in 1862 at the South Kensington International Machinery Exhibition and was no doubt intended for powering agricultural machinery. No actual example of the original is known to exist and this model has been scaled down (about 1:10) from catalogues and drawings.