A silver clockwork lithographed tinplate single-engined aeroplane, made by Mettoy in 1950. 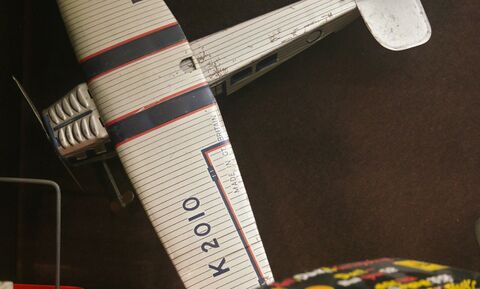 The aircraft wings are marked K 2010. While Mettoy markings didn't necessarily signify the model number, in this case, the aircraft seems to combine the bodyshape (with two square side-windows, big square tail and bobbly engine cover) of model 2009 with the tapered wing of model 2007 (although the tyres are black rather than red-and-white lithographed tinplate of 2007 and 2009).

Our guess is that this might be model 2010, for which we don't have a catalogue image.