The ambulance was described in advertising as being based on a Fordson Thames Services chassis, and its most striking feature is the contoured red crosses set into recessed white circles, which as well as presumably making the model's production paintworking easier, creates a very strong contrast against the dull green. These large Red Cross symbols are on the sides, roof, and across the opening rear doors. 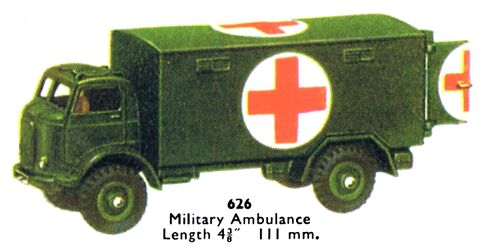 So far the models in the Army series have been based on actual combat vehicles, or on those connected with supplies and transport for fighting forces. The latest addition to the Army range is a non-combatant vehicle; but it is no less important on this account to the well-being of a modern Army. The new Dinky Toy is indeed a strikingly faithful reproduction of an up-to-date Army ambulance, and I know it will be greeted with joy everywhere.

The vehicle is correctly based on a Ford chassis, and is provided with a body typical of the style adopted by the Army. As usual, all the main features of the real ambulance are to be seen in it, including the hatch on the top of the cab roof and ventilation louvres in the body. Perhaps the most striking features are the brilliant red crosses against white backgrounds, on the top and sides of the body, and the doors at the rear. And these doors really open, so you can make full use of the model in your play schemes.