A green example of Mamod's Steam Locomotive SL 1 from the gauge 0 Mamod Steam Railway collection, produced from around ~1979/~1980 onwards.

The model has the look of a very upright narrow-gauge tank engine, with a tall black chimney and a large brass steam dome.

The Mamod SL 1 has an appreciable fan-base, probably more for the heavy-duty steel construction and charming look of a Welsh narrow-gauge railway locomotive, and less for the unit's actual performance as supplied from the factory in the early 1980s. However, a third-party market for upgrade parts quickly sprang up and was made use of by determined owners, to whom a success in modifying the SL 1 to work smoothly represented a matter of personal pride.

The supplied fuel-tablet burner could be replaced with a multi-wicked third-party meths burner kit, and after this upgrade, many owners seemed to get a taste for further "modding" – the double-action pistons could be replaced with better-sealed units, modifications could correct the speed of a "fast" or "slow" SL 1 and the range of modifications tried out by enthusiast groups eventually extended to radio control and full boiler replacements. 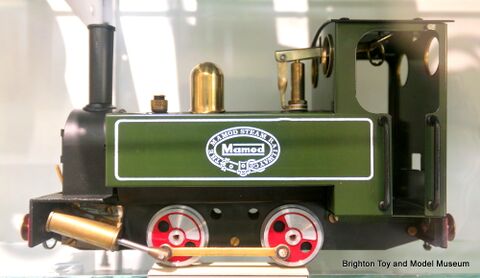 The Sl 1's proportions appear very similar to the Fletcher Jennings 3ft 2¼in gauge locomotive "Townsend Hook", which originally worked at the Dorking Greystone Lime Co. Ltd. and was rescued by the Narrow Gauge Railway Society in 1960 and put on display at the Bluebell Railway. The locomotive is currently under restoration at Amberley.

Due to the timing of the loco's appearance on public display, it seems pretty reasonable that this may be the actual loco that the SL1 was based on.