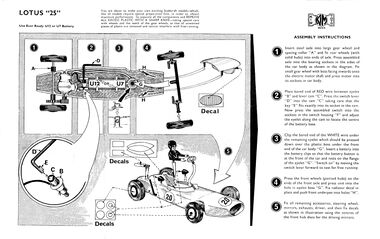 A boxed blue plastic motorised Lotus 25 racing car made by Scalecraft Limited in the 1960s.

The racing car is simply moulded in blue plastic with black plastic details, and white circular stickers with a black "20" racing number on the sides and front bonnet. Wheelhubs, an area at the back, and the windscreen, are silver stick-on foil-embossed paper.

The single AA-sized battery push-fits into the base along with most of the other parts, and a black plastic handbrake-style lever at the right-hand side acts as an on-off switch.

The Scalecraft Lotus appears in a 1963 Gamages advert and Scalecraft's 1965 catalogue, so it'd seem that he mdoel went into production shortly after the appearance of the actual Lotus 25, which appeared in 1962.

We think that this example is probably from the later 1960s. The series box artwork seems to have been changed a number of times, with an initial artwork series using limited colours, this series of artwork that looks rather like the colour artwork for Airfix Motor Racing (~1962-68), and at least one later series of artwork that looked very 1970s. , so ... assuming that the first artwork had a run of at least a couple of years ... we're looking at probably the mid- to late 1960s.