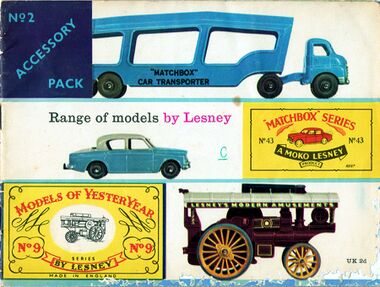 The Moko brand was started by Moses Kohnstam (~1840ish-1912). Moses (apparently originally from Czechoslovakia) had lived in Germany and knew the German toy industry well, but instead of trying to start his own German toy company and compete with what was already a saturated local market, he realised the opportunity for marketing and distributing German toys and started M. Kohnstam & Co. in Nuremberg, gaining offices in London, Furth, Milan and Brussels.

Julius' brother Emil Kohnstam (~1880ish-1958) left Germany in the mid-1930s, and took charge of J. Kohnstam Ltd., on Julius' death in 1935, with Julius' son (and Emil's nephew) Richard Kohnstam also joining the company, still using the Moko trademark as a "catch-all" brandname for otherwise unbranded goods supplied by the business. Moko was finally trademarked in the UK in 1949.

Lesney Products was founded by Leslie Smith (1918-2005) and Rodney Smith (1917-2013) in around ~1947, and the two were almost immediately joined by a third partner, Jack Odell, who had previously worked at Die Cast Machine Tools Limited (DCMT, Lone Star, previously associated with Crescent).

Richard Kohnstam had recently been casting around other metal toy manufacturers over the possibility of joint ventures, and when Jack Odell asked Richard for advice regarding the new Lesney company, the two businesses decided to cooperate, with Lesney manufacturing and J. Kohnstam packaging and distributing, and with joint "Moko-Lesney" branding.

Lesney's first major-selling product was their model of the Queen's Coronation Coach, initially meant to capitalise on the expected 1952 Silver Jubilee of King George VI, but (when the King died ahead of the Jubilee) modified to become a Coronation tie-in instead. They also produced a metal "Muffin the Mule" marionette for Kohnstam, and manufactured some early, larger-scale toy vehicles.

Lesney's 1953 Matchbox Series was a range of smaller-than-usual diecast toys each scaled to fit into a matchbox, and sold in matchbox-styled packaging. In a market dominated by "the inkies" – Dinkies, Corgies, Impies and the like – fighting for market share with similar products to roughly the same scale (originally intended to work well with the now-obsolete gauge 0 model railways), Matchbox stood out as having a distinctive name and concept, and a scale that marked them out as cheerful toys to be played with (and played with hard) without worrying too much about damage.

The standard story about the origin of the Matchbox brand is that Jack Odell's daughter went to a school whose rule regarding playground toys was that children were only allowed to bring toys to school is they could fit inside a matchbox. However, the "Collecting Matchbox Diecast Toys" also mentions that Moko at one point had produced small wooden dolls packaged in matchboxes.

The Kohnstams trademarked the Matchbox name in 1954 (apparently without Lesney's knowledge!). This may have made Lesney a little worried that if the relationship ever broke down, their distributors could have "Matchbox" cars made for them by someone else. Shortly after Emil died in 1958, Lesney bought out the full rights and phased the Moko name out of their packaging.