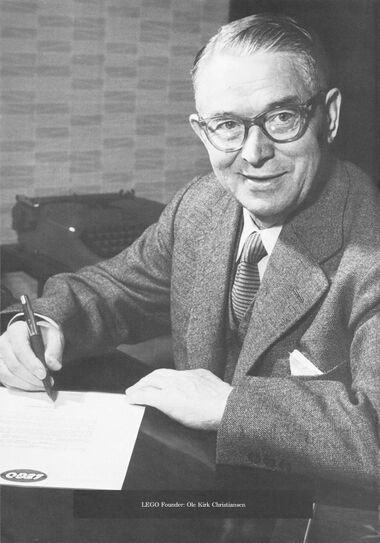 The Denmark-based Lego company (LEGO AS, known as The LEGO Group) is currently (as of 2019) the world's largest toy company.

~1917-1932
Ole Kirk Christiansen works as a carpenter, making furniture. The business is hit badly by the world depression in the 1920s.
1930s
It's suggested to Ole that perhaps he consider branching out into wooden toys, like the new yo-yo's that are all the rage.
1932
Ole opens his new factory for making wooden toys (and also miscellaneous wooden household goods).
The company invests strongly in equipment.
1934
The company is officially renamed "LEGO", which is a play on the Danish "leg godt" ("play well"), but also includes the three letters of Ole's first name.
1945
The company produces a wooden toy repeating pistol, the year the German occupation ends. This design becomes Ole's first patent.
1947
The company again decides to invest heavily, this time in an injection moulding machine, to produce more detailed plastic parts for some of their wooden toys.
The company also starts to produce a clone of Hilary Page's plastic clip-together "Kiddicraft Self-Locking Building Bricks", selling them as "Automatic Binding Bricks" – a similarly clumsy and awkward name.
1953
The bricks are given the simpler name "Lego Mursten" ("Lego Bricks").
~1955
Told that toyshops like "system" toys with add-on sales, Ole renames the Lego Mursten range as Lego System. The company produces a Lego Town Plan Set baseboard printed with roads, that can be supplied with toy cars and trees, and enough Lego to create small buildings.
1958-
After being told by exacting German buyers that the bricks' design is not sufficiently impressive, the company redesigns the brick underside to incorporate extra protrusions that guarantee that every stud is gripped at at least three points. This is now the modern Lego brick.
The redesign also adds new clip-in door and window pieces (the earlier system has relied on the bricks having side-slots)
The redesign also adds angled roof-bricks. Previously, the Page system used cardboard for roofing, and the Lego system had had to rely on unrealistic stepped standard blocks.
1959
Since the LEGO name is increasingly being associated abroad with just the bricks, the company decides to rebrand all their existing wooden products as BILOfix.
1960
After a fire, the company decides not to to rebuild the wooden toy production capability. From now on "Lego means Lego".
1961
Samsonite start producing Lego in the USA
1960s-
The BILOfix wooden toys brand is taken over by two family members. Their separate company produce "Bilofix Engineer" as just "Bilofix".
1962
Lego gains wheels! The official wheel-related R&D is considered unsuccessful, but an employee has quietly worked on an unofficial alternative design, and it is adopted.
1966
The Lego Train System is introduced. It includes a large black motorised block, a battery compartment that can be converted into a locomotive tender, and plastic rails that clip onto the studs of Lego strips, used as railway sleepers.
1968

1969
Lego Duplo appears. This is a double-size version of Lego for smaller children. The a 2×2 standard brick fits onto a single Duplo stud, and 4×2 standard brick fits onto a pair of adjacent Duplo studs. Although Hilary Page had had a similar system (as did the Samsonite Lego range), the new design cleverly has a hole in the top of each large Duplo peg to accommodate the cylinder under each "new-style" post-1956 Lego brick.
1972
Hollow floating "ship hull" pieces allow the resulting Lego boats to be used as floating bath toys.
~1978
Introduction of the complete Lego "MiniFigure"
1982
Lego Expert becomes Lego Technic.
A limited-edition book Fifty Years of Play is published as the official company history to mark the 50th anniversary.
1996
Legoland Windsor opens in the UK.
1999
Lego Star Wars, the first Lego "licenced" range.
Legoland California opens.
2002
The first Lego Store opens, in Cologne, Germany.
2011
Legoland Florida opens.
2012
Legoland Malaysia.
2014
Release of The Lego Movie.
2016
Legoland Dubai
2017
Release of The Lego Batman Movie.
Legoland Japan

The following 47 pages are in this category, out of 47 total.