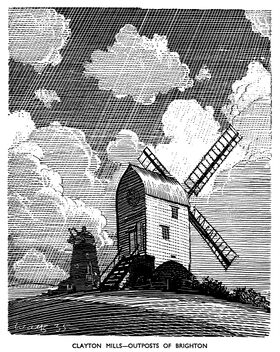 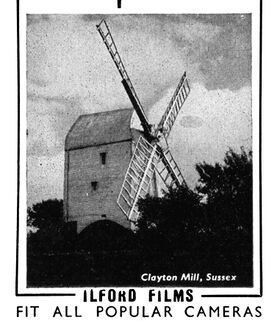 A motorised model of the Jill Windmill in Clayton, Sussex.

The model has been fitted with a custom electric motor and gearing (2012), and is operated from a small button at the front edge of the 00-gauge layout, in Arch Three.

The Jill Windmill is one of a pair of Grade II Listed windmills in Clayton (the "Clayton Windmills"), named "Jack" and "Jill". 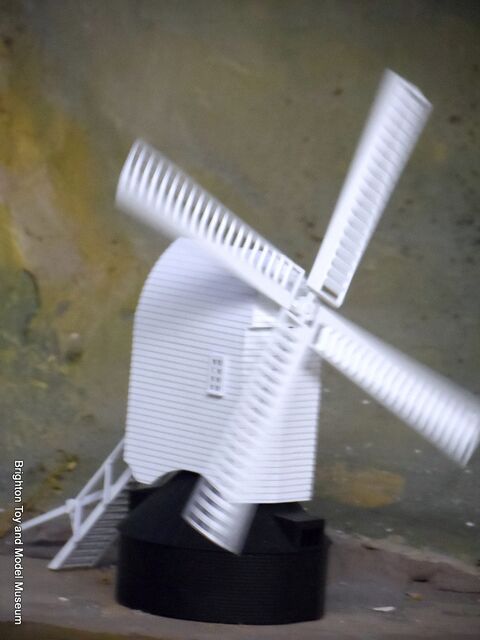 We're pretty definite that the kit that this was built from is the Airfix H0/00 Windmill Construction Kit 4019. This kit is not specifically for "Jill", but having squinted at photographs of the model and the real windmill, we're dratted if we can see much of a difference ... apart from this model having one small rectangular window per side, and Jill having two per side. A number of forum contributors online have identified the Airfix kit as being their own local windmill, so it seems that quite a few of these real mills may have been built from exactly the same designs.

... Which makes sense. With something as expensive and exotic as a windmill, once a design had been perfected, and was sufficiently flexible to be built anywhere, there was little incentive to tinker with the plans. Build a windmill too small and it lacked efficiency, build it too big and the engineering changed and you had to be more worried about it perhaps being damaged in a storm.