A wooden matchstick model of the famous iron bridge at Ironbridge Gorge, crossing the River Severn.

The model is overhead in Arch One, above the shop counter. 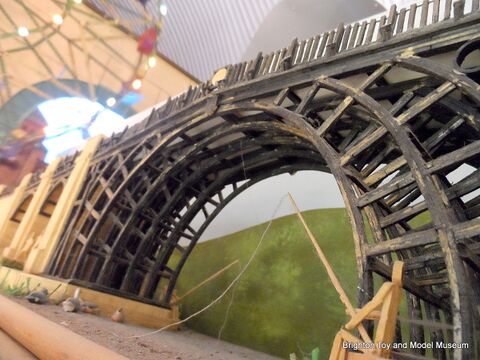 About the original bridge

The bridge at Ironbridge was built by Abraham Darby III, one of the founders of Britain's Industrial Revolution. Darby perfected a method of manufacturing iron using coke to remove the impurities, and this made the material cheap enough to be used for purposes that would previously have been uneconomic (such as bridges). Designed by Thomas Farnolls Pritchard, and opening in 1781, the bridge heralded a new dawn in the industrial use of iron, and its high visibility effectively made it a giant advertisement or billboard for the new industrial processes that were being developed.

Ironbridge literally put Darby's foundry "on the map", and its distinctive design made it an icon of the Industrial Revolution.

The bridge was revolutionary, being the world’s first bridge to be made of metal, and as a result, it proudly carries the name "Iron Bridge" or "The Iron Bridge" without any further geographical identification, because when it was built it was the world's only iron bridge.

Built to cross the Severn Gorge and make it easier for companies to get their goods in and out of the growing ironmaking region of Coalbrookdale, making the bridge out of iron was an obvious (if ambitious) idea. The job of building the bridge was picked up by Abraham Darby III, who offered to absorb any cost overruns himself (and as a result, spent the rest of his lif ein debt).

As the world’s first, "prototypic" cast iron bridge, the design was largely experimental, and was over-engineered to anticipate the likelihood of encountering previously-unknown engineering problems. The location of the bridge near the foundry allowed workers to flit between the sites, and most of the parts weren’t cast just to agree with the official plans (as we’d expect with modern metal mass-production), but were carefully tailored to fit what had been already built, to avoid cumulative errors due to casting variations and mismeasurements, which might have resulted in pieces that simply didn’t fit together (and couldn’t be easily amended). As result, most of the bridge components represent unique castings.

Another anachronistic feature of the bridge is that many of the construction techniques used are adapted from woodworking, including the use of dovetail joints.

The cautiousness of the bridge design meant that it used significantly more metal that was strictly necessary, but also meant that it was less of in issue when a few of the joints later cracked – some were patched with metal plates, but others were simply left as-is. The subsequent local iron bridges were lighter and cheaper to build, and arguably more elegant, partly due to the experience gained from building the "Mk1" version.

The new bridge attracted visitors from around the world, and Ironbridge Gorge was declared a World Heritage Site in 1986.

Ironbridge hosts a network of industrial revolution-themed museums, the tenth being Enginuity, which among other things hosts a Meccanuity Meccano exhibition each year with the help of the Telford and Ironbridge Meccano Society.