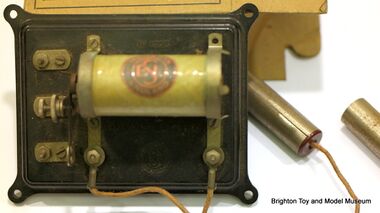 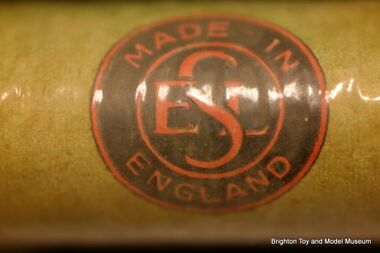 The coils has a back plastic or Bakelite base with a protruding mounting lug in each corner, a mounted coil with a large red and black SEL sticker, with its output wired attached to two metal cyclinders.

Small manufacturers of toy motors sometimes had induction coils in their ranges, not because these were especially useful, but because they were easy to make.

An induction coil works on the same principle as an electrical transformer - an alternating current is sent through a coil of insulated copper wire and creates a varying electromagnetic field, which then pushes electrons along a second length of wire that's been wound around the same core - the applied electrical current in the first coil induces a current in the second, giving the name.

The key point with these coils was that the voltage available on the second set of windings - the output voltage - depends on the voltage applied, and on the ratio of the number of windings in each of the two - doubling the number of winding sin the second coil doubles the output voltage (albeit with a reduced flow of current. This meant that you could apply a fairly low-voltage waveform to one set of terminals (with a relatively large current), and obtain a far higher voltage from the second set of terminals (with lower current).

With these particular coils, the varying input signal was created by simply switching the current on and off to produce a voltage "spike", which would then produce a similar "spike" on the output wires of perhaps hundreds or thousands of volts, depending on how the coil had been wound. If the two terminating metal cylinders were near to each other when this happened, the high voltage could cause a spark to jump between the two cylinders (giving these coils the alternative name of a spark coil).

Spark coils also produce a nasty spike of radio-frequency energy when they "spark", and were used in easy radio signalling experiments, with the radio pulse associated with the electrical discharge being typically used for sending Morse code. However, these toy induction coils has limited uses were probably bought mostly as electrical curiosities (or as ways of allowing evil children to subject their family and dwindling numbers of remaining friends to electric shocks).

For a while, Meccano Limited also sold a toy induction coil that was supposed to provide "unlimited hours of fun", but we probably have to assume that this "fun" was to be obtained by wiring the terminals up to doorknobs, kitchen tableware and household plumbing.

Due to modern health and safety regulations, it's no longer considered advisable to sell items to small children that can be used to torture family pets or kill elderly relatives by administering electric shocks, and these sorts of devices are now no longer common "toy shop" items.