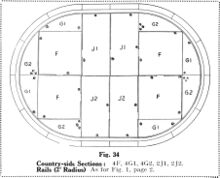 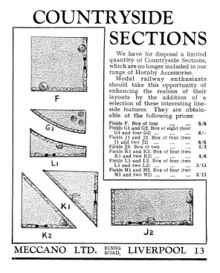 A "Metroland" display of Hornby countryside accessories made in the early to mid 1930s, including horses, cows, sheep, and a lineside sign set that includes two workmen carrying a "Halls Distemper" sign.

In a world before easily-mouldable plastics (where the main plastic was "Bakelite") a certain amount of ingenuity was required to source parts for trees and shrubbery - hedges from this period were typically made from loofah - a cucumberlike vegetable that becomes very internally fibrous when mature, and whose "skeleton" is often used for bathroom backscrubbers.

The display is backed by a straight section of gauge 0 track with an electric Metropolitan railway train, to reproduce the idyllic "Metroland" scenery used in the Metropolitan Railway's advertising (before the existence of the railway meant that the fields were then built on).

The Hornby "Countryside Section" sets appeared in the Hornby Book of Trains in 1932, and allowed owners to add scenery to their gauge 0 layout simply and easily with a set of pieces that fitted together inside and around the track

The effect of filling areas with Countryside Section pieces was to give the appearance of a section of countryside divided up into rectangular fields. The sections were green-painted, and typically had field hedges along one or two sides, and were dotted with the occasional tree of trees. Some of the rectangular sections also had breaks in their hedge-edging with access gates.

For a circular track, the centre space could be filled with just a couple of Countryside Section packs, one pack of four of the square F pieces to form a large square, and one pack of eight G1 curved and G2 filler sections to pad the large square out into a large circle.

The concave L1 and L2, and M1 and M2 pieces would then sit outside the curved track and pad it out into something more rectangular. If your circular track was extended to form an oval, your large central circular area could be separated and stretched with pairs of rectangular J1 and J2 extension pieces, whose width was the same as the length of of a standard piece of straight track, and if you'd used half-length straights, there was a thinner version of the extension piece, J3. Pieces K1 and K2 were used if you had a figure-of-eight track, to block in the area around the crossover section, and pieces H and R were used with level crossings, with one end of "H" slipped under the level crossing to provide a section of roadway, and the dummy section "R" slipped under the other side of the crossing so that it wouldn't end up on a tilt.

While the Countryside Section sets were obviously very useful to anyone who wanted to assemble a model railway layout that could be taken apart and packed away very easily, with minimal technical skill - making it especially useful for setting up temporary displays - most model railway owners were probably capable of gluing and pinning hedges and trees to pieces of green-painted hardboard themselves, and if they weren't, then learning was part of the fun of owning a model railway. Hornby discontinued the Countryside Section sets and got rid of their remaining stock in 1936, and anyone finding a set in their loft would be liable to think that they were not worth a great deal (and too bulky to be worth storing) so surviving pieces are very, very, very rare.