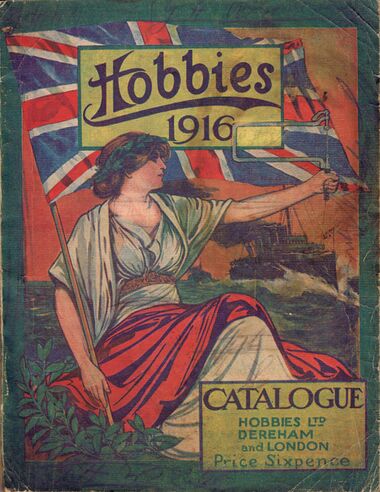 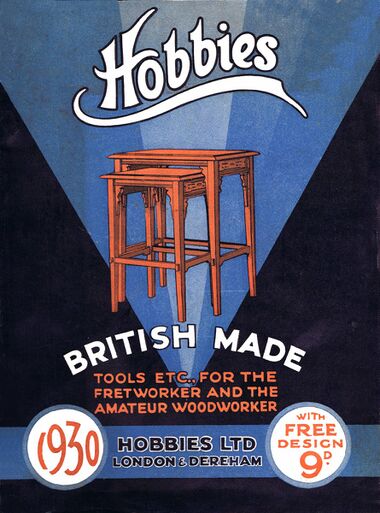 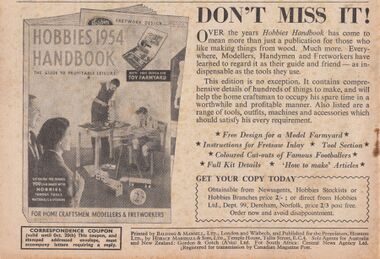 The names Hobbies (Catalogue), Hobbies Handbook and Hobbies Annual have all been used for yearly publications by Hobbies Ltd. of Dereham, Norfolk.

With the exception of "HOBBIES NEW ANNUAL", which seems (from the two examples in our collection) to have dealt exclusively with construction projects, most of these issues seem to have had a mixture of content, although in the case of catalogues with many illustrations and featured "article" products, the distinction between annual and catalogue becomes somewhat blurred. This is presumably why Hobbies at a couple of points chose to instead adopt the less specific term "Handbook".

The introduction to the 1916 issue of "Hobbies" declared it to be "the Thirty-Fourth annual issue of the Catalogue", suggesting that the publication may have first appeared as long ago as 1883.

Unlike most annuals, which endeavour to blend fiction with practical instruction, this volume, which now makes its first appearance, caters only for those interested in making things. It has been modelled in the belief that there is a large number of readers whose practical interests ar enot entirely satisfied by the mixture referred to above. HOBBIES NEW ANNUAL is new in that respect, for a sincere effort has been made to cater for every practical hobby interest. it is at once an Annual and a Manual!

The matter included has been specially selected because the articles dealt with do not require elaborate equipment or a heavy outlay on materials. None of the articles are suggestions, for everything has been made and tested. It is unfortunately true that many articles are written, describing things which have never actually been made. In that respect, too, this Annual is new; and it is thought that the diversity of subjects, the superabundance of illustrations, and the textual treatment will appeal to those many thousands of practical hobbyists who at present have had no Annual of their own.

In one other way this Annual differs from all others, for if the slightest difficulty be encountered in making up any of the articles described herein, the reader can obtain the services of an expert who will speedily help the reader out of that difficulty. Merely address a letter to the undersigned, c/o the Publishers, explaining the point on which you need advice. It will come to you by return of post.

This run of Hobbies Annual ended with the 1968 issue, with the company going into liquidation in late '68.