A white 00-gauge Beer Wagon with white roof, marked "GAMBRINUS" and decorated with the side view of a goat's head approaching a glass of beer. The wagon was made by Marklin in the later 1930s. 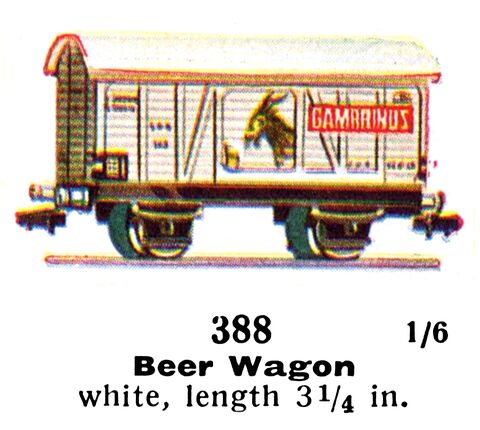 In Germany and Eastern Europe, Gambrinus is an iconic historical-cum-mythological character whose relationship to beer is somewhat like "Father Christmas"' relationship to the winter solstice holiday – one might be tempted to refer to him as "the Patron Saint of beer", if it wasn't for the fact that Gambrinus isn't actually a saint.

Because of this, these is an embarrassment of different breweries and beers using the Gambrinus name, and Wikipedia lists four German "Gambrinus" breweries, a Czech beer brand, and other breweries in Austria, Denmark, Romania and the US, all using the name.

We haven't yet tracked down the origin of the "goat" logo, so we don't know for sure whether Märklin had a particular brand in mind when they used the name, or whether they were trying to be generic ... but the logos on their other contemporary rolling stock do relate to real companies (e.g. "Shell").

The goat might be a reference to Norse mythology, in which the roof of Odin's castle was topped by a giant goat that produced beer.