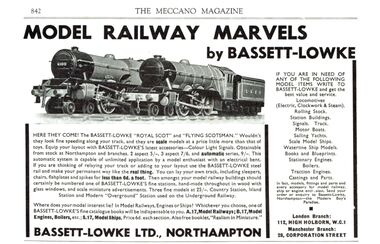 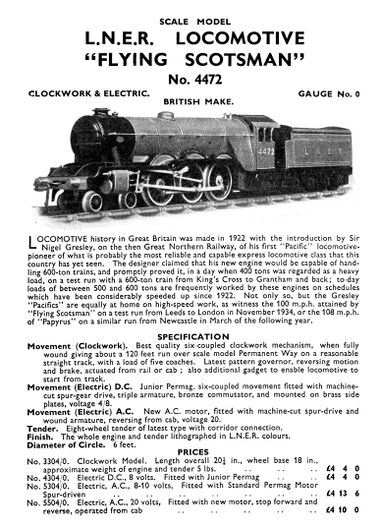 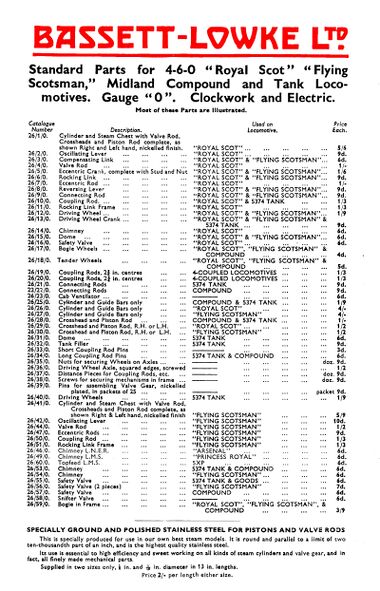 A green electric model LNER 4-6-2 gauge 0 locomotive 4472 Flying Scotsman and tender, made by Bassett-Lowke in the 1930s.

In the mid-1930s, the two express passenger locos that everybody in the UK was interested were the green LNER Flying Scotsman and the red LMS Royal Scot, and Bassett-Lowke promoted their models of both locos together, offering them as a simple choice depending on whether you wanted your model railway to be LNER or LMS (or, for people who were less serious about railways, whether you preferred your expensive model passenger loco to be green or red).

As well as selling this popular model in clockwork and electric versions, Bassett-Lowke also made the critical "Scotsman" parts available, "loose", for people who preferred to build their own model locomotives but didn't fancy the prospect of having to hand-engineer critical components such as wheels, cylinders and drive gear themselves. 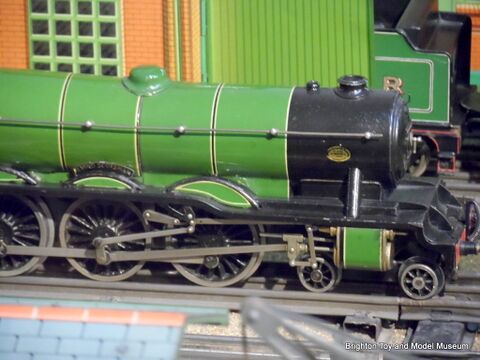 A page from the 1937 catalogue, showing a range of gauge 0 "Scotsman" parts available separately. 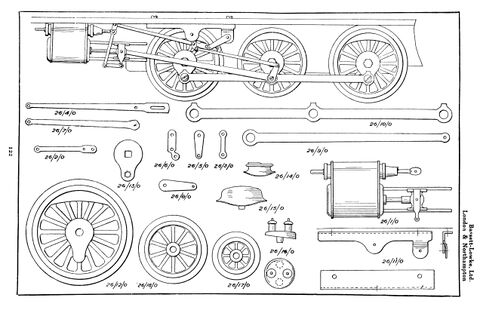 LOCOMOTIVE history in Great Britain was made in 1922 with the introduction by Sir Nigel Gresley, on the great Northern railway, of his first "Pacific" locomotive – pioneer of what is probably the most reliable and capable express locomotive class that this country has yet seen.

The designer claimed that the new engine would be capable of handling 600-ton trains, and promptly proved it, in a day when 400 tons was regarded as a heavy load, on a test run with a 600-ton train from King's Cross to Grantham and back; to-day loads between 500 and 600 tons are frequently worked by these engines on schedules which have been considerably speeded up since 1922. Not only so, but the Gresley "Pacifics" are equally at home on high-speed work, as witness the 100 m.p.h. attained by "Flying Scotsman" on a test run from Leeds to London in November 1934, or the 108 m.p.h. of "Papyrus" on a similar run from Newcastle in March of the following year.