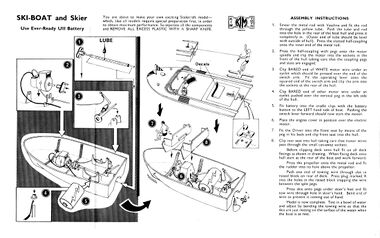 A boxed Electric Ski-Boat with Skier plastic snap-together kit, made by Scalecraft of Twickenham, probably in the 1960s.

The boat has a white hull and red deck, and comes with transfers and two painted pink plastic figures in swimwear, a seated male driver wearing dark swimming trunks, and a female water-skier wearing a red bikini.

The kit comes with a small electric motor, and the instruction sheet says that it requires an Ever Ready U11 Battery.

The boat and box on display

The box has a nesting plain card base with paper tape securing the corners, and a printed white card five-sided upper piece, printed in black and aqua bluegreen against white, with edges folded and secured with metal staples.

The box edge text says "Made in England" / "Motor Empire Made", which suggests that the plastic parts were made at the plant in Twickenham, Middlesex, while the small electric motor is stamped "JEI"(?) / "H K", which suggests that it was made in Hong Kong. The term "British Commonwealth" (instituted in 1949) took over from the phrase "British Empire", which would suggest that the packaging was pre-1960s ... but it's possible that the older wording might have persisted for some time in some places, and the packaging might be later than this.

As well as the Scalecraft branding, the box and instructions sheet also carry a trademark logo for KIM TOYS, which might refer to the manufacturer of the motor – the logo has the letters KIM squeezed into a circle, flanked by two scalloped panels lettered "KIM" / "TOYS", and it might be that the central circle represents the rotating part of an electric motor, with the two flanking panels representing a pair of magnet poles.

Regarding the bikini-clad water-skier, the Bikini was named in 1946 after the Bikini atoll, which was used as a test site for British nuclear weapons testing from 1946-1958. The bikini became steadily more popular into the 1960s, so we'd tend to date the boat as being form the 1950s or 1960s, with an emphasis on the 1960s. We certainly know from an online trade catalogue that it was on sale in 1965.