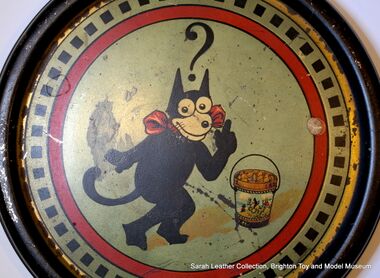 1930s: Felix on the lid of a seaside-themed tinplate bucket [image info]

Felix the Cat, created by Otto Messmer, made his screen debut in the silent short film Feline Follies (1919) as "Master Tom".

A far more complex, sophisticated and adult character than Disney's later and more childlike Mickey Mouse, Felix was smart, streetwise, and witty, and Messmer dealt with the problem of how to have a cartoon cat express a range of emotions and reactions by giving Felix's tail a life of its own ... to the extent that it could even detach itself when required. Messmer also had Felix "flag" surprise or shock by having a large question mark or exclamation mark appear above his head.

Felix was wildly popular and was one of the first properly merchandised cartoon characters, but his popularity took a knock with the arrival of movies with sound, embraced by Disney, but initially ignored by Felix' owners.

Pages in category ‘Felix the Cat’

Media in category ‘Felix the Cat’