From The Brighton Toy and Model Index
(Redirected from Farnell)
Jump to:navigation, search 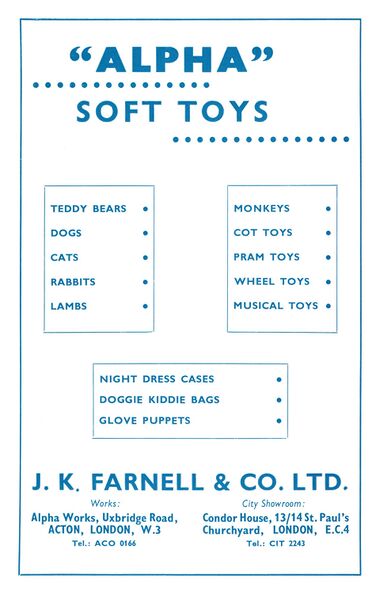 In 1897, Henry and Agnes Farnell, whose earlier family business made small textile items, established a soft toy firm in West London following the death of their father, John Kirby Farnell. J.K. Farnell became a private company in 1921, and by the end of the decade, the company had showrooms in London, Paris and New York. However, in 1934, the factory was destroyed in a fire, but the company was up and running again the following year.

There are certain similarities between J.K. Farnell's early designs and those of Steiff. For example, the central chest-seam, which is typical of Farnell products, is also seen on many Steiff and Bing bears. Furthermore, various Farnell bears have long, tapering arms, similar to those found on early Steiff bears.

The inspiration for Winnie the Pooh was a real teddy bear, bought by A.A. Milne’s wife, Dorothy, for their son, Christopher Robin Milne, from the London store, Harrods, in 1921. It is said that this bear probably came from the factory of J.K. Farnell, as they made bears exclusively for Harrods at the time. Winnie the Pooh’s original name was Edward Bear, first appearing in A.A. Milne’s anthology of poetry When We Were Very Young in 1924.