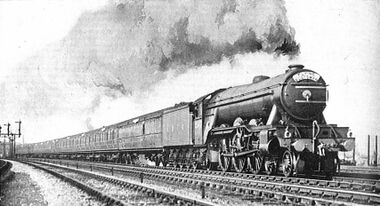 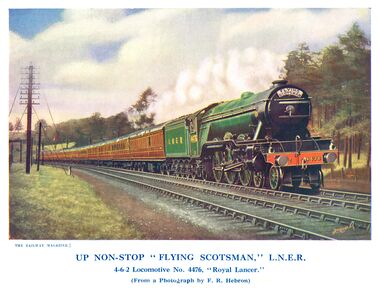 A bewildering quantity of colour illustrations in railway magazines, books and postcards are signed with a thick diagonal red scrawl in the bottom right corner, "F. Moore", or "FM".

They're distinguished by strict geometrical accuracy, and one might wonder how one person managed to produce such an output of paintings. It turns out that the paintings weren't produced conventionally, but by taking an existing black and white photograph and physically painting on top of it - a process that allowed the painter to stay at home or in their studio, painting, while someone else did the tedious work of visiting locations, composing pictures, and waiting for a train to come along to be photographed at exactly the right moment. From a publisher's point of view, this meant that they could decide in advance exactly which pictures they wanted: "Here are some eight-by-ten photographs, we'd like colour versions of this, this and this, and we'd like then for next month please".

While some of the artistic credit goes to the painter, a significant amount is due to the (usually anonymous) photographer who took the original picture.

As far as the painting is concerned, "F. Moore" was a pseudonym apparently "owned" by the Locomotive Publishing Company, which employed the services of the rather reclusive Thomas Rudd (~1861-????) to do the actual painting. Rudd appears never to have signed his own name to a work, and accounts differ as to whether he was responsible for the entire output of "F. Moore", or whether others may have been involved from time to time.