An early Erector Set No.4, in its original two-tray wooden box. 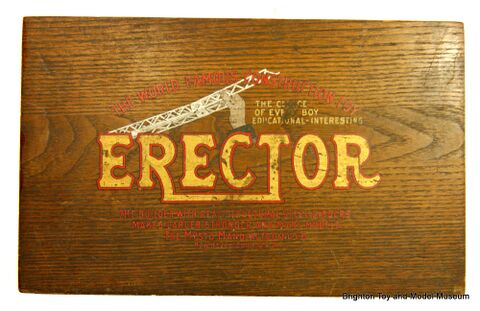 Although Alfred Carlton Gilbert's patented Erector construction system is usually associated with the company name A.C. Gilbert, Gilbert's first proper commercial enterprise before the construction set idea was the selling of a range of magic trick sets under the name "The Mysto Manufacturing Company". The magic set product line continued after the company was renamed after its founder, along with science sets.

An interesting footnote to Mysto is that the company was initially probably one of the main "mainstream" magic trick suppliers, and Gilbert used the slogan "Hello Boys" on its advertising. At the time, Mae West hadn't yet made any films, and hadn't yet fully developed the stage persona that made her famous – she was working on the stage, but doing stage magic. So West may well have been familiar with Mysto's the slogan, and may have "borrowed" it for her "Hello Boys!" catchphrase.

The manual in the box has lost its cover, but contains references to prize-winning designs and their designers for the company's 1914, 1915 and 1916 competitions. The manual and box were also produced when Gilbert's company was still called The Mysto Manufacturing Co..

A quality-control slip inside the box says that it was checked and passed QC in September 1915, so the 1916- manual must have been added later, either by the company or by an owner.

Transcribed from the internal lid label:

CONTENTS OF ERECTOR NO.4