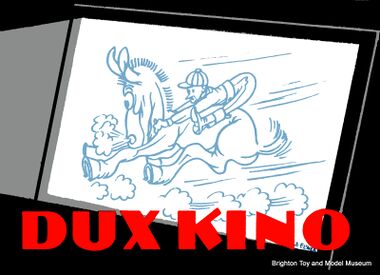 The DUX range of animation projector toys were manufactured by Markes & Co of Lüdenscheid, Germany, between the 1930s and the 1970s.

The problem that the DUX set out to solve was that of how to produce a projector and film system with a comparatively long running time using only a limited length of film, and needing a much smaller number of frame-images than would be needed for a conventional film-strip cartoon.

The DUX designers managed this by recognising that with a suitable pair of alternating images, the pair could be repeatedly switched back and forth several times to show repetitive motion in a single "scene" using only two drawings.

Using this "wiggle" technique, one then needed a method of moving or switching between a sequence of "wiggling" image-pairs.

DUX managed this by using a single strip of 35mm AGFA safety film holding a sequence of image-pairs. The film was threaded horizontally through the mechanism, with each images in a vertical pair lining up with its own projection lens and bulb, with the illusion of motion produced by alternately illuminating the two lamps, and with new image pairs introduced by drawing the film through the projector.

The film-advance mechanism was powered by clockwork with a motor that could run for ten minutes, and the bulbs were powered by an electric motor. The housing was a rigid ergonomic Art Deco design executed in Bakelite, and a measure of how much pride the designers took their engineering was evident in their production of an additional mains-power transformer that, instead of being a separate external box hanging off a cable (as in much modern equipment), was ingeniously designed to be exactly the same size as a battery, and which could be inserted into the battery compartment. 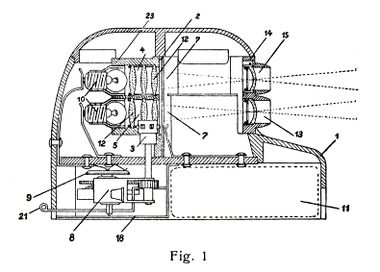 Sectional view through the DUX-Kino.

The DUX-Kino is based on an entirely new technical principle, the salient features of which are a film with 2 rows of pictures and the arrangement of a double system of lamps and lenses. The above section-illustration gives a clear view of the general arrangement. The Bakelite housing 1 is of a pleasing shape and encloses and protects the technical apparatus. The film is inserted in the film-channel 2, is seized by the film-conveyor 3 and slowly moved between the double-condensors 4 and 5 and the picture-windows 7. The film requires a period of about 5 minutes for the entire journey. Power for the film-conveyor wheel is provided by a movement 8 which has a run of ten minutes. This clockwork movement 8 with the help of sectordisc 9 controls the supply of current to the lamps 10, which thereby receive either current form the battery 11 or from the DUX transformer which can be put in place of the latter. The light is collected and concentrated by the triple condensor lenses 12. The rays penetrate the film and are brought into their proper direction by the lenses 13. these throw the picture onto the screen, which must be set about 32 in. in front of the lens.

The simplicity of the construction, the high quality of the materials used and the great strength of the optical fittings guarantee a clear run and an extraordinarily clear picture on the screen, considering the small size of the apparatus. The DUX cinema is an optical production combining fine technical workmanship with simplicity and reliability in use and one can safely put it in the hands of any child.

Although Markes & Co had previously made a small projector, the Dux Kino "Silberschwalbe" ("Little Cinema") based on the design of the American "Irwin Projector", the DUX "MM" was the first model that the company produced that used their own unique system.

The "MM" was followed by the revised Model 3 in 1938, the Model 40 in the early 1950s, and finally the Model 44 and the cheaper hand-cranked Duxinette (whose handle made it look slightly like a school's table-mounted pencil sharpener).

In the late Fifties came a new design meant to evoke the idea of a television, the DUX TV 35 with integrated viewing screen, and a version with a small music box, the DUX TV 35 M.

A revamp of the idea in 1968 produced the Dux Kino 68, and (in the 1970s), the Dux Elkino 900, which both used rolls of 8mm film. There was also the Dux Episkop 49 episcope, which could illuminate a sheet of paper and project its image onto a screen.