The set consists of wooden struts and 90-degree curve pieces that peg together with ~4mm wooden dowel to make bridge and crane structures. 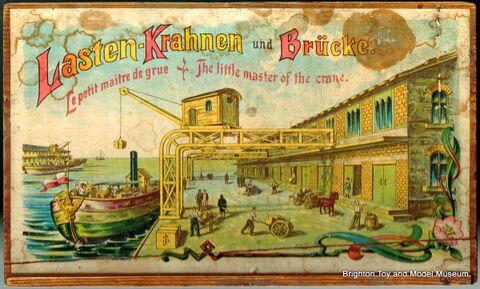 The background of the set is something of a mystery to us. Collected by museum trustee Michael Gilkes, we don't know the date, manufacturer or even country of origin, but the multilingual box lid suggests mainland Europe (and probably not France or Germany), the artwork design suggests Holland, and the lid carries a monogrammed "JS" or SJ" which is probably the maker's name.

An internet search reveals no trace of the set except another example in a museum collection in Holland, which further increases the likelihood of there being a Dutch connection.

At first sight the set looks modern, with its geometrical quadrant curves looking quite reminiscent of Art Deco design. However, simple geometrical curves might also signify that the set is inspired by early "naive" real-life engineering design, setting the date of the set much earlier.

In many of these cases we can date sets to perhaps the nearest decade or two by the technology used in the metalworking, and with plywood we can date sets to the 1910s or later, but the simple wooden box with a slide lid and large paper sticker (similar to those used by Richter for Anchor Blocks back into the Nineteenth Century) seems to defy dating, as does the beechwood woodworking of the parts (unless one carbon-dated the parts!).

So the set might, possibly be as old as the latter part of the C19th. Maybe.

Another method of dating is to look for social and technological clues in the box artwork. In this case, the large label shows a quite involved dockside scene with a building on the distant far bank, and one would normally expect to see clues in this sort of scene regarding the progress of steam technology or motor cars. However, the only shown road vehicle is horsedrawn, and other than the steam riverboat being loaded or unloaded, the boat out at sea is a sailboat. Other than this stem boat and the pictured bridge/crane itself, the artwork shows no other obvious primary signs of industrial technology.

Early C20th artwork for these sorts of toys tended to try to show off current fashionable scientific/industrial developments, which are absent here, so the artwork might be Twentieth-Century and slightly "retro" (which, while possible, would be odd for an illustration for an "industrial" toy), or it might actually have been produced in the latter part of the Nineteenth Century.