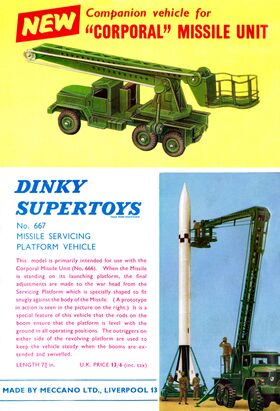 The toy launch system had three main parts, all of which added to the overall play value of the toy, which included a big truck-type vehicle, a crane-type raising attachment, a towed platform with little fiddly things that transformed form a trailer to a launch base, and of course the Big Firing Rocket.

The Erector Vehicle is a long-wheelbase non-articulated four-wheeler with a horizontal mid-mounted spare tyre and two independent separated high-visibility cab compartments, for the driver and launch controller.

The payload section consists of a rocket frame with a workign handle and gears system that lets the rocket be elevated from horizontal to vertical. Different versions of the toy had these gears in metal, plastic or a combination of the two - the plastic gears were cheaper to make, but very vulnerable to damage due to the forces created when an impatient child tried to wrench the frame vertical or horizontal rather than carefully and slowly winding the handle.

The Launch Platform is a small green rectangular metal block with two wheels that is towed behind the main vehicle. When parked, the block has four feet that are used to stand it rigidly, and the pair of side-wheels are removed. The Erector vehicle can then raise the missle vertically over the platform, lock it in position and retreat.

The Corporal Rocket is white nylon with fins at the rear and a supposedly harmless soft rubber nose. Inside the base in a cylindrical metal "foot" that pushes onto a spring - when the rocket is fired, the sprung foot suddenly projects out of the rocket base against the launch platform, and throws the rocket up into the air.

Since the rocket noses and fins were somewhat prone to damage (and you only got one rocket with each set), there is now a small aftermarket amongst collectors for spare rocket parts.

The Corporal Missile ... a rocket you can launch

As recently as June 1959 the first guided weapon to be used by the British Army was launched in the Hebrides. It was the "Corporal" missile 45 ft. in length. Now, only a few weeks later, a Dinky Supertoys replica of the Corporal Missile Unit is available. It is a working model too! Time and time again, this Dinky Supertoys rocket (which is spring loaded) can be launched from its platform in a realistic manner. This is a most exciting model, because it actually WORKS.

The Missile is moulded in Nylon, with a harmless soft hollow rubber nose cone to ensure safety. Both the Erector Vehicle and the Launching Platform are die-cast in solid metal. The Erector vehicle is fitted with gearing which enables the boom to pick up the missile and swing it to the horizontal travelling position. Then, at the firing point, the boom is operated to raise the Missile vertically on to the Launching Platform, from which it is "fired" several feet into the air.

The Corporal missile system seems to have been heavily promoted at the time, with both Dinky and Corgi Toys launching their own competing models of the system to coincide with the missile's deployment by British forces. Corgi's counterpart of Dinky 666 was split into two models, the Corgi Major 1113 Erector Vehicle with Missile, and the Corgi Major 1112 Launcher for Missile (there was also the combined Corgi Gift Set No.9, which included an auxiliary vehicle).

While the Corporal missile programme tends to be remembered as a product of the Cold War, the roots of the research program go back to WW2 and the sharing of intelligence pictures of Germany's prototype V1 rocket.

Highly experimental in nature, the programme acquired the goal of eventually being able to launch a 1000-pound warhead at a target 75 miles away, and land somewhere inside a target radius of 300m. This turned out to be difficult to achieve, and the missile design acquired refinement after refinement and additional system after system in an attempt to improve accuracy. The Corporal ended up with an external guidance system, and a Corporal battalion required a small fleet of support vehicles, and had a high failure rate (made light of in an early JPL information film), reckoned to be somewhere around 50% shortly after the system went into service. The Corporals complex fuelling requirements also resulted in a delay between the vehicles arriving at a new site and being able to launch, of around nine hours – partly due to the use of a fuming red nitric acid system that was not exactly easy to deal with.

The Corporals were deployed in Germany in the 1950s as a defence against possible invasion by the USSR, who knew that should they attempt to invade Western Europe, their forces would be facing mobile Corporal missiles at a range of variable locations tipped with a choice of either high explosives or battlefield tactical nuclear weapons. Due to the unreliability of the Corporals, their nuclear warheads were designed to insert the nuclear core into the detonation system remotely, only after the missile was safely in flight at a reasonable distance from the launch site, to minimise the change of Western forces accidentally nuking themselves rather than their opponents.

As the West's first operational nuclear guided missile, the Corporals were deployed by US forces and also provided to the UK. The Corporals started replaced by the solid-fuel Sergeant missiles in the early 1960s.