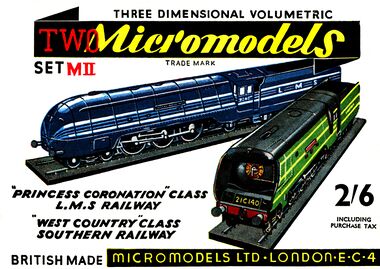 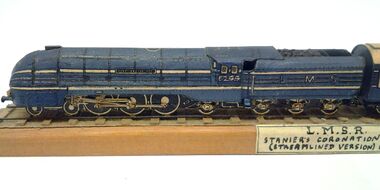 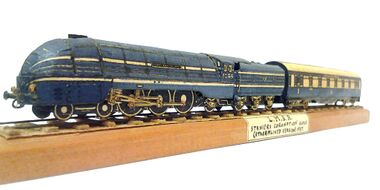 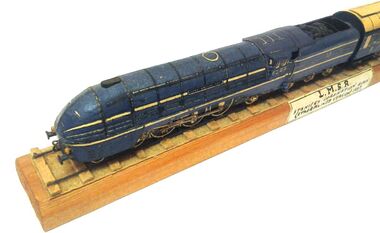 The model seems to carry the running number "6244", which would correspond to the LMS "City of Leeds" / "King George VI", which was built streamlined, but wasn't blue. This may be why listings of the card model don't tend to bother mentioning the loco number.

This example of the model is rather well built, and is mounted on a small wooden plinth with track and a coach from Set X.

A note on the underside indicates that it was completed by its builder on 10/8/1953, and mounted on the base some years later.

A blue "Coronation-Class" 4-6-2 locomotive with stripes.

This is a difficult model to build realistically, due to the complex curvature of the nose. beginners may find that the front of the loco looks "slabby" on the final model: more advanced builders will "work" the back of the nose panels to create a bulging "dish"-shape (a little like the way that panel-beaters work sheet-metal) before assembling.

These locomotives were unusual in having streamlined sides that extended forward to become smoke deflectors on either side of a conventional-looking recessed circular locomotive front. The front edge of the protruding smoke-deflector plates were angled, and stuck out further at the bottom then the top.

These locos tended to be associated with the Golden Arrow train.