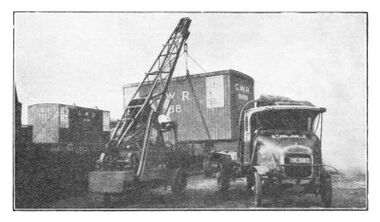 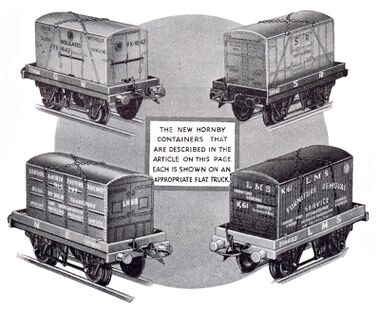 The modern universal, stackable "ISO" shipping container was introduced in the 1950s and revolutionised freight transport worldwide - previously, the labour-intensive and time-consuming job of loading and unloading goods as they were transferred between different sorts of vehicles had been one of the largest costs associated with long-distance freight, whereas with standardised containers, the goods never needed to be packed or unpacked - the container section of a lorry or railway car was simply detached from one vehicle and put onto another in one simple operation, a process that was faster, safer, and had a far lower risk of damage to whatever was being transferred - the operators didn't have to know anything about the correct way to unpack and repack cotton or electronics, or different foods - all they had to do was move the containers, without worrying too much about what was inside them.

The basic principle of general-purpose containerisation of loads for easy transfer between different types of vehicle was recognised much earlier ... the creation of a transport network of canals and railways across Britain meant tedious loading and unloading operations at the transfer points, and while giant mechanised machines could lift coal wagons and tip out their contents, and some commodities leant themselves to easy unloading via a bottom chute (e.g. with grain wagons), the unpacking and repacking of meat or other foods requiring strict hygiene, or the shipping of "delicate" loads, was far easier with sealed containers.

One of the earliest applications of the shipping container was the transport of furniture. Nowadays, it's possible to hire a van with decent suspension and drive it across the country, but in the 18th and Nineteenth centuries, one would have to lash the furniture to a horsedrawn wagon and take it to the nearest canal or railway station, and then reload everything again onto another wagon at the other end. Pickfords were one of the pioneers of using furniture containers that could be loaded up at the originating destination, transferred to a canal boat or railway wagon, and then taken by horse or lorry to the destination at the other end, without repacking.

With the establishing of the "Big Four" railway companies in the UK, larger railway companies were keen to extend the principle of the efficiency of a central coordinated organisation to other connected businesses, and acquired hotels, airlines, trucking companies and even shipping companies in an effort to create broader integrated transport networks, and this integration included furniture-moving services that linked a rail network with a company's own fleet of road vehicles to offer a door-to-door containerised service. Companies with manufacturing plant distributed around the country could use the speed and reliability of rail network with a service that picked up and delivered site-to-site, without their goods or components being touched by human hand.

The early British containers were comparatively small by modern standards, and tended to have curved roofs based on the idea of having the maximum possible volume that could fit under British road-bridges on small trucks, or (for larger containers) fit though British railway tunnels. The modern more "boxlike" 20-foot and 40-foot containers that appeared in the 1950s were designed more for American interstate tracking and rail transport, and were perfect for loading and stacking on large container ships, transforming international trade.