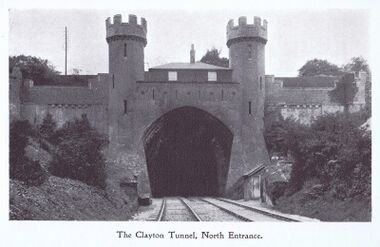 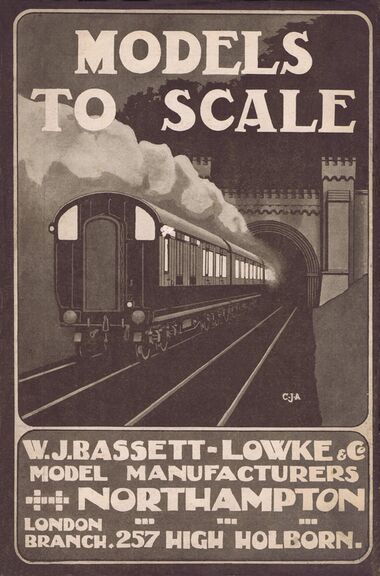 A model of the exotically castle-shaped North entrance to the Clayton Tunnel. The tunnel was completed in 1841, and the tunnel-keeper's cottage was added to the "castle" in 1849.

The model is in the "countryside" section of the large 00-gauge layout, in Arch Three.

The tunnel entrance was reputedly built to look like a castle to satisfy the farmer who owned the land, and later had the tunnel-keeper's cottage built between its turrets.

The job of the tunnel-keeper was to keep the tunnel's gas lamps lit to make the passage less frightening to rail travellers, but with the advent of larger, higher-speed steam locomotives, the job of keeping the lamps re-lit (and the tunnel interior painted a nice clean white) moved from "difficult" to "impractical".

Two workers died in a accident during the construction of the tunnel, and this, along with the infamous train collision that happened in the tunnel in 1861 with the deaths of twenty-three people, gave the tunnel a reputation for being haunted.

The Clayton Tunnel accident was caused by a combination of factors that overwhelmed the tunnel's signalling procedures. Three trains were allowed to leave Brighton station closer together than was supposed to happen. The first train entered the tunnel, causing a warning sign to be set to danger. The second train then stopped inside the tunnel and started to reverse, at which point the first train emerged, and the signal was set to clear. At this point the third approaching train entered the tunnel at full speed and ran into the back of the second train.

Many members of the general public were really not very keen on the idea of being in a train hurtling through a pitch-dark tunnel, and the Clayton Tunnel Disaster didn't help to reassure them that these fears were groundless. The disaster is supposed to have helped inspire Charles Dickens' creepy tunnel-based short ghost story, "The Signal-Man" (1866), which plays on the idea that a tunnel crash was the ultimate railwayman's nightmare.

When the short story was published, Dickens had also just personally survived the 1865 Staplehurst rail disaster, which happened on a bridge.