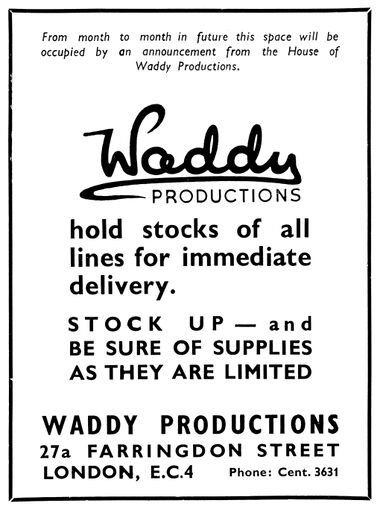 Waddy Productions were a producer of card and paper-based games and card games during the 1930s, and were part of the giant Amalgamated Press business, at one point the largest producer of comics, magazines, newspapers and other periodicals in the world.

We're not currently sure where the name "Waddy Productions" comes from. While Waddy is a surname, it's also notable that the main output of Waddy Productions (board games and card games) was rather similar to that of the Waddington's company, and it's conceivable that the name "Waddy" might have been chosen to suggest a link with the other company.

Alfred and Harold Harmsworth started their first magazine in 1890, and used new technology such as telegraphy and machine typesetters to rapidly build up a publishing empire, with Amalgamated Press being founded some time around ~1901.

The Mirror Group took control of Amalgamated Press in 1959 and merged it with two other companies to produce International Press Company (IPC). At one time or another, the company published several of the UK's biggest newspapers, although several were only owned briefly before being sold on, such as The Observer (from 1903 to 1911), The Sunday Times (from 1908 to 1915), and The Times (from 1908 to 1922).